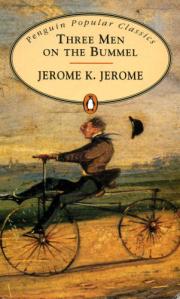 Last year I read Jerome K. Jerome’s Three Men in a Boat (To Say Nothing of the Dog) which was one of my favourite books of 2011 and one of the funniest books I’ve ever read. Three Men on the Bummel is the sequel, less well known but still worth reading. It’s set a few years after Three Men in a Boat but it’s not really necessary to read them in the correct order. In this book we join our old friends J, Harris and George again (this time without Montmorency the dog) on a bicycle tour across Germany’s Black Forest. There’s not much of a plot – like the first book, the whole story really just consists of a series of mishaps and disasters, funny anecdotes told by the three friends, descriptions of the places they visit, and some philosophical musings and observations from our narrator, J.

The humour in this book is very much the same as in the first and some of the stories are very similar too (if you remember reading about Uncle Podger in Three Men in a Boat, for example, there are more Uncle Podger stories here). But I did start to lose interest a little bit towards the end of the book and I couldn’t help feeling that maybe Jerome had used up most of his better ideas in the previous book. There’s nothing here that has stuck in my mind the way the pineapple incident or the Hampton Court maze did, to give just two examples. But there are still some moments that stand out: George being accused of embarking on a life of crime after getting on a train with the wrong ticket, the three of them being lost on a hillside arguing over which way was north, Harris and his encounter with a man watering the road, George’s experiment with a phrase book, and a few others. My favourite was the trick J and Harris play on George, leading him to believe a statue is following him around the town, appearing in four different places at once.

“Why, that thing,” said George; “look at it! There is the same
horse with half a tail, standing on its hind legs; the same man
without his hat; the same–”

Harris said: “You are talking now about the statue we saw in the
Ringplatz.”

“No, I’m not,” replied George; “I’m talking about the statue over
there.”

George looked at Harris; but Harris is a man who might, with care,
have been a fair amateur actor. His face merely expressed friendly
sorrow, mingled with alarm. Next, George turned his gaze on me. I
endeavoured, so far as lay with me, to copy Harris’s expression,
adding to it on my own account a touch of reproof.

The German setting in my opinion didn’t work as well as a backdrop for the novel as the River Thames did in Three Men in a Boat but it does give Jerome an opportunity to have fun with British and German stereotypes (though in a gentle way, I thought) and the misunderstandings that could arise from differences in language and culture. He spends a lot of time discussing different attitudes to law and order for example:

Nowhere, and under no circumstances, may you at any time in Germany walk on the grass…The very dogs respect German grass; no German dog would dream of putting a paw on it. If you see a dog scampering across the grass in Germany, you may know for certain that it is the dog of some unholy foreigner. In England, when we want to keep dogs out of places, we put up wire netting, six feet high, supported by buttresses, and defended on the top by spikes. In Germany, they put a notice-board in the middle of the place, “Hunden verboten,” and a dog that has German blood in its veins looks at that notice-board and walks away.

Overall this wasn’t quite as funny as Three Men in a Boat and I can see why it’s not as popular, but I still enjoyed reading it. Both books were written in the late Victorian period (this one was published in 1900) but I would recommend them even to people who don’t usually like Victorian fiction as they do have quite a modern feel and a lot of the humour is still relevant today.

Oh, and if you’re wondering what the word ‘bummel’ means, it is explained but you’ll have to wait until the end of the book to find out!

17 thoughts on “Three Men on the Bummel by Jerome K. Jerome”