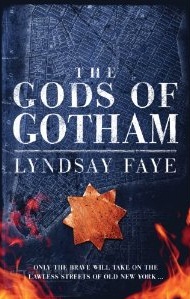 New York City, 1845: When Timothy Wilde loses everything in a fire that destroys a large part of Manhattan, his brother Valentine helps him get a job as a ‘copper star’ in New York’s newly formed police force. Due to his knowledge of ‘flash’, a slang spoken largely by criminals, Timothy is assigned to the Sixth Ward, one of the city’s most notorious areas where crime rates are high and where racial and religious tensions are increasing with the influx of Irish immigrants fleeing the potato famine.

Timothy is unenthusiastic about his new job until one night when he’s walking home from work and a ten-year-old girl runs into him, covered in someone else’s blood. Soon Tim finds himself on the trail of a child killer and discovers that he has an unexpected talent for detective work.

I must admit that when I received a copy of The Gods of Gotham from the publisher, I wasn’t sure this was going to be the type of book I would enjoy. Well, I couldn’t have been more wrong, because I loved it! I could tell from the first page that I liked the writing style and by the end of the first chapter I knew I was going to like the narrator too. But the thing I enjoyed most about The Gods of Gotham was the wonderful setting. Every time I picked up this book and started to read I felt I had left the modern world behind for a while and was actually there, walking through the streets of 19th century New York, which is the highest praise I can give to any historical fiction novel. I’ve read so many books set in Victorian London, and it made a nice change to read one set in New York during the same period.

We also meet lots of strong, interesting characters – Mercy Underhill, the reverend’s daughter and the woman Timothy loves; Bird Daly, the little Irish girl he met in the street at the start of the novel; and Silkie Marsh, who runs the brothel at the centre of the murder investigations. And at the heart of the story is the relationship between Tim and his brother Valentine. Timothy himself is easy to like but he isn’t perfect and has enough flaws to make him a believable character. Although he doesn’t always interpret things correctly, he’s intelligent, observant and compassionate. Val is a very different type of person – tough, aggressive, addicted to morphine and drinking – but by the end of the book we learn that there’s more depth to Val than there seemed to be at first.

The use of flash is something that you will probably either love or hate – personally I thought it added to the atmosphere of the book and made the dialogue feel lively and fun. I was surprised to find that I was already familiar with some of the words and it was interesting to see how many of them have now come into everyday use. But there were other words and phrases that meant nothing to me and so the glossary at the front of the book (based on George Washington Matsell’s Vocabulum, or The Rogue’s Lexicon) was very helpful, especially at first!

For me, the actual crime plot was secondary to the setting, the atmosphere and the characters but it was still good enough to keep me guessing until the truth was finally revealed. The Gods of Gotham was something different and original – I loved it and was pleased to discover that there’s going to be a sequel!

I received a review copy of this book from Headline Review.

10 thoughts on “The Gods of Gotham by Lyndsay Faye”