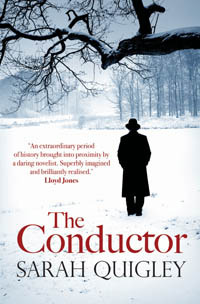 It’s 1941 and Russia is now at war with Germany. As the Nazis surround Leningrad with the aim of starving the city into submission, the composer Dmitri Shostakovich begins work on his Seventh Symphony. While other important musicians are being evacuated, Shostakovich insists on remaining to help defend his city. To his wife, Nina, the real reason he doesn’t want to leave is because he doesn’t want to be disturbed while writing his symphony and it seems to her that he is putting his music before the welfare of his family.

During the siege, the government orders that the Seventh Symphony be performed to raise the morale of the Soviet troops at the front. Since the members of Leningrad’s famous Philharmonic Orchestra and their conductor Mravinsky have already been removed from the city, the job of performing the Seventh Symphony falls to another, less highly regarded conductor, Karl Eliasberg and the second-rate Radio Orchestra. Eliasberg finally has the chance to do something great, but it’s not going to be easy…of the musicians who have stayed in Leningrad through the long, cold Russian winter some of them are dead and the others barely have the strength to lift their instruments.

Alongside the stories of Shostakovich and Eliasberg is the story of a third man, Nikolai Nikolayev, and his beloved nine-year-old daughter, Sonya. Nikolai must make the heartbreaking decision of whether to risk sending Sonya out of Leningrad on her own while he stays behind to continue his work as violinist in the orchestra.

The Siege of Leningrad was surely one of the most horrific episodes of the Second World War. This book was maybe not quite as emotional as other novels I’ve read on the same subject (The Bronze Horseman by Paullina Simons, for example) but it was still very moving. The idea of people being so hungry they’re driven to boiling down leather briefcases for protein or mixing water and hair oil to make soup, while watching as their family and friends die one by one of starvation or cold, is horrible to think about. And yet the story is not too bleak or depressing because it’s not just about war and suffering – it’s also about the power of art and music and how something good can come from even the worst circumstances imaginable.

The characters Sarah Quigley has chosen to focus on in this novel are all interesting, three-dimensional people who each have their own set of problems and obstacles to overcome during the siege. My favourite was Karl Eliasberg, the conductor of the book’s title. Based on a real person but one who we don’t know much about, the author imagines him as a shy, awkward man with low self-esteem, desperate to have his talents recognised and to be accepted by the cultural elite. Shostakovich is his idol but every time he comes face to face with him he finds himself saying the wrong things and failing to give the impression he was hoping to give. Eliasberg’s character is so well-written and believable I felt I could really understand him and empathise with him.

Despite Shostakovich being one of the central characters and the story revolving around one of his compositions, you don’t need any knowledge of classical music to enjoy this novel. However, I would highly recommend listening to the Seventh Symphony after finishing the book – it’s definitely worth it and it really adds to the reading experience. I loved this book and I have a feeling that when I make my list of favourite books of the year in December this might be one of them.

18 thoughts on “The Conductor by Sarah Quigley”