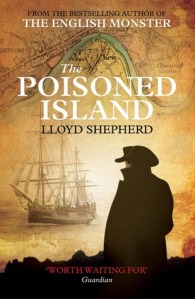 In June 1812 the Solander returns to London from a voyage to Tahiti financed by Sir Joseph Banks of the Royal Society. The ship is carrying a cargo of rare and exotic plants destined for the Kew Gardens. But why is Banks so interested in one particular specimen? Could there have been another motive behind the voyage?

When one of the Solander’s crew is found dead under suspicious circumstances, the magistrate John Harriott and Constable Charles Horton of the Thames River Police begin to investigate. Soon more murders take place – and when he learns that all of the victims were members of the crew, Horton must find out how the deaths could be connected with the recent trip to Tahiti.

I’ve been looking forward to this since I read Lloyd Shepherd’s first novel, The English Monster, last year. When you loved an author’s debut novel there’s always the worry that their next book might be a disappointment, but that was definitely not a problem here because I thought The Poisoned Island was even better than The English Monster! Both novels are complete stories in themselves and it’s not necessary to read them in order, but they do have a few things in common. They each explore the darker side of the British Empire, trade and colonialism (it seemed clear to me that one of the messages of The Poisoned Island is a warning against the dangers of exploiting a country for its resources), they both involve the Royal Society, and there are also some recurring characters, including Harriott and Horton of the River Police.

It’s interesting to see how Horton uses methods of crime-solving that in 1812 are new and innovative. Instead of merely watching and observing or relying on witness statements, he is actively investigating the crimes, looking for clues, searching for evidence, interviewing suspects and trying to find motives. This arouses the suspicion and dislike of London’s other police constables and magistrates but Harriott has faith in him and can see the value of his detection methods. Horton’s wife, Abigail, makes a few brief appearances in the novel too and I thought she had the potential to be a great character. The fact that Abigail was so underused was the only thing that disappointed me about this book; she’s intelligent, courageous and with her interest in natural science I had expected her to play a bigger part in the story.

Interspersed with the main storyline are some chapters set in Tahiti (or Otaheite as it was known at the time) following the adventures of a young Tahitian prince and showing us what happened to the island when Europeans first arrived bringing guns, alcohol and disease with them. But while The English Monster was a dual time period novel with alternating chapters set in different centuries, The Poisoned Island concentrates on Horton and Harriott’s London with only a few flashbacks to an earlier time. Although the murder mystery forms the central plot, there’s also a lot of historical detail that helps to bring the Regency period to life. And I enjoyed learning about the Kew Gardens, the process of collecting and studying botanical specimens, and the work of Joseph Banks’ librarian, the botanist Robert Brown. I’m hoping there will be more Harriott and Horton novels, but if not I will still look forward to whatever Lloyd Shepherd writes next.

10 thoughts on “The Poisoned Island by Lloyd Shepherd”