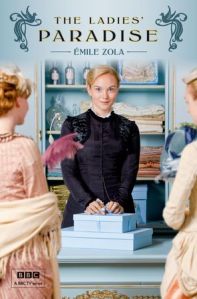 The Ladies’ Paradise is only the second book I’ve read by Zola; my first was Thérèse Raquin and the two are very, very different. Au Bonheur des Dames, to give it its French title, was published in 1883 and is the story of a Paris department store, based on the real-life Le Bon Marché.

At the beginning of the novel, Denise Baudu arrives in Paris with her two younger brothers, hoping to find work in her uncle’s draper’s shop. She is disappointed to discover that he is unable to offer her a job because his shop, along with the other small shops in the street, is losing business to a new department store, the Ladies’ Paradise. The new store is able to offer a larger selection of products at cheaper prices all under one roof, and none of the smaller traders can hope to compete. Still, Denise desperately needs to earn money to support her brothers so although she understands how her uncle feels, she is pleased when she is offered a job at the Paradise.

Denise quickly finds that life as a salesgirl at the Paradise is not easy but she’s determined to succeed and overcome whatever obstacles are put in her way. And when she catches the eye of the owner of the Paradise, Octave Mouret, he soon discovers that she is a woman with morals and principles; it’s obvious that she is not going to give him any encouragement – but this only makes him want her more.

I was hoping to love this book as much as Thérèse Raquin but that didn’t happen. The Ladies’ Paradise is a book that I enjoyed, but not one that I loved. It offers some fascinating insights into both Parisian life and the rise of the department store in the late 19th century – and of course, the idea of a larger, cheaper store putting all the small, independent shops out of business is still very relevant today – but I disliked most of the characters and while the long descriptions of the silks, satins and other fabrics sold at the Paradise were beautifully detailed I did get a bit bored after a while. Maybe I just don’t like shopping enough!

However, I did find it fascinating to read about the way the Paradise was run and what it was like to work there. In some ways working at the Paradise was a very different experience from working in retail today, one of the biggest differences being that the salesgirls employed by the Paradise lived and ate on the premises and were treated almost like servants. But from a selling and marketing perspective, I was surprised to learn how modern and sophisticated Mouret’s methods were; a lot of the ideas he had for running the store, advertising its products and attracting customers are still used today (though I didn’t really like the implication that women are so easy to trick and tempt into parting with their money).

The only character I really liked was Denise. I had sympathy with all the ordeals she faced after starting her new job: having trouble fitting in with the other women, feeling that her clothes and hair weren’t right, being bullied by other employees, and worrying about making enough money to take care of her two younger brothers. I found it harder to like or care about any of the other characters (Denise’s brother, Jean, particularly annoyed me – surely he was old enough to take more responsibility for himself and his actions), though I did admire what Mouret had achieved in making the Paradise such a success.

I don’t want to sound too negative about this book because I still found a lot of things to enjoy about it, but I’m hoping the next Zola novel I read will be more to my taste than this one. Any suggestions are welcome!

25 thoughts on “The Ladies’ Paradise by Émile Zola”