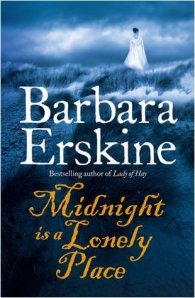 My first introduction to Barbara Erskine’s work last year, River of Destiny, left me unimpressed but I was assured by Erskine fans that her earlier books were better, so when I found this one at the library I decided to give her another chance. I also thought it sounded like an ideal book to read for the RIP challenge, even though it wasn’t on my original list.

When author Kate Kennedy’s relationship with her boyfriend, Jon, comes to an end and she is forced to move out of their London home, she decides to rent a cottage on the Essex coast where she can spend the winter working on her new biography of Byron. The owners of the cottage, Diana and Roger Lindsey, live in a farmhouse nearby and do their best to make Kate feel welcome, but unfortunately not all the members of the Lindsey family are happy to see her. The eldest son, Greg, an aspiring artist, had been using the cottage for his painting and resents Kate for pushing him out. His fifteen-year-old sister, Alison, is an amateur archaeologist and is furious when she discovers that Kate has been interfering with her dig at what she believes is an ancient Roman grave.

When strange things start to happen at Redall Cottage, Kate suspects Greg and Alison of trying to frighten her away, but after several encounters with ghostly figures she begins to accept that she is being haunted by the ghosts of the Roman soldier Marcus Severus Secundus, his wife Claudia, and the Druid prince, Nion. It seems that Kate has stumbled upon a two thousand-year-old love triangle that ended in a murder and a curse – and secrets that have been buried under the earth for centuries are about to be revealed at last.

Midnight is a Lonely Place was much better than River of Destiny, but still not a book that I can say I loved. I was right about it being a perfect RIP choice, though. It has all the elements of a classic ghost story: a lonely, isolated cottage, an ancient burial site, ghostly apparitions, strange smells and unexplained noises, relentless snow, sleet and blizzards. It’s quite scary in places and you might not want to read it late at night if you’re on your own (while I was finishing the book on Friday evening the real-life weather outside obliged with heavy rain and strong winds which made it even more atmospheric).

While Marcus Severus Secundus, Claudia and Nion do have a strong presence in this novel, the story is set entirely in the early 1990s (which actually feels surprisingly dated from a 2013 perspective) and we only learn about the Roman characters’ lives in brief flashbacks at the start of the chapters. I would have liked their storyline to have been more fully developed as I felt I didn’t get to know them well enough to really care about them or their secrets and this meant that, for me, the novel wasn’t as effective as it would have been with a stronger historical element.

The second half of the book is suspenseful and action packed, as the level of paranormal activity increases and more and more of Kate’s friends and neighbours become involved (at one point it felt as if the whole population of Essex were wandering about getting lost in the snow) but I found the ending disappointingly abrupt. I’m not sure I correctly interpreted the final page and after reading what was quite a long book (more than 400 pages) I had expected a more satisfying conclusion. I certainly enjoyed this book a lot more than River of Destiny but I’m not sure I’ll be looking for any more of Barbara Erskine’s books – though I might still be interested in reading Lady of Hay, her first and best known book.

15 thoughts on “Midnight is a Lonely Place by Barbara Erskine”