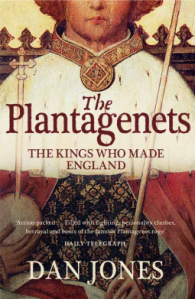 As someone who has always read mainly fiction, I have been making an effort to read more non-fiction. The type of non-fiction books I find myself drawn to tend to be books about history or biographies of historical figures; I’ve read a few of these recently and The Plantagenets by Dan Jones is one of the best I’ve read. It’s a very long book at almost 700 pages but as the book covers two centuries of history that’s not surprising!

The book begins in the year 1120 with the wreck of the White Ship in which King Henry I lost his only son and heir. This led to the period of English history known as The Anarchy, a civil war with the country divided between supporters of Henry’s daughter, Matilda, and of his nephew, Stephen. It was the son of Matilda and her husband, Geoffrey of Anjou, the future Henry II, who was England’s first Plantagenet king. Dan Jones tells the story of not only Henry II’s reign, but the reigns of all the Plantagenets who followed, up to and including Richard II who was deposed in 1399. Of course there were several more Plantagenet kings after Richard II, but Jones does explain why he chose to end the book at this point.

I love reading about the Plantagenets and find them far more interesting than the Tudors. However, I have to admit that most of my knowledge of them comes from reading historical fiction and while I certainly think it’s possible to learn through fiction, it was good to have the opportunity to read a factual account of the period. Actually, I found this book almost as entertaining and compelling as a novel anyway; Dan Jones does a great job of making the historical figures he’s writing about come to life and conveying the drama of some of the most important events of their reigns. Instead of just telling us that Henry I’s son died in a shipwreck, for example, he describes the sails of the ship billowing in the wind, the shouts of the crew and the freezing water pouring into the ship. This makes the book very readable, though despite it not being too academic it still feels thoroughly researched and I never had any reason to doubt the accuracy.

Before beginning this book, there were some Plantagenet kings whose lives I was more familiar with than others. I found that I already had quite a good knowledge of Henry II and his relationships with his wife, Eleanor of Aquitaine, his sons and daughters, the knight William Marshal and the Archbishop of Canterbury, Thomas Becket. And I knew the basic facts about Richard I (the Lionheart) and his crusades, and about his brother, King John. The story of the final king featured in the book, Richard II, was also familiar to me, but I had less knowledge of the others in between – Henry III and the three Edwards (I, II and III). I enjoyed learning about Simon de Montfort’s rebellion during the reign of Henry III, the 1326 invasion of England by Queen Isabella and Roger Mortimer, and the possible fate of Edward II, all subjects I had previously known very little about.

The Plantagenets would be a great choice for any history lover looking for an accessible introduction to a fascinating time period. I’m hoping for a second volume covering the 15th century and the Wars of the Roses.

I received a copy of this book from Netgalley for review.

17 thoughts on “The Plantagenets by Dan Jones”