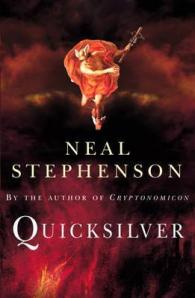 Quicksilver is the first of Neal Stephenson’s Baroque Cycle, a series of novels set during the 17th century. I had been interested in reading this book for a long time but was putting off reading it because of its length (over 900 pages) and its reputation for being a very difficult, challenging read. I don’t have a problem with long, difficult books but need to be in the right frame of mind to begin reading them.

At the beginning of the novel, the mysterious Enoch Root arrives in Boston, Massachusetts, to deliver a letter to Daniel Waterhouse, an English Puritan and natural philosopher, asking him to return to England to solve a dispute between the mathematicians Isaac Newton and Gottfried Wilhelm Leibniz over who was first to invent calculus. As Daniel voyages home across the Atlantic, pursued by the pirate Edward Teach, we are given a series of flashbacks to the 1660s and his time at Trinity College, Cambridge where he first met Isaac Newton and the other famous scientists of the period.

At the end of the first part, we leave Daniel Waterhouse’s story behind for a while, to be picked up again later. The middle section of the book follows the adventures of Jack Shaftoe, a ‘vagabond’, who rescues a beautiful slave, Eliza, from a Turkish harem during the 1683 Siege of Vienna. Together they travel across half of Europe, ending in Amsterdam, where Eliza becomes involved in the world of trade and banking. We then rejoin Daniel Waterhouse again just before the death of King Charles II and the Glorious Revolution.

In the two paragraphs above I have only given a very basic outline of what Quicksilver is about. It would be impossible for me to mention everything! The book covers almost every important historical event of the period including the plague, the Great Fire of London and the Restoration – and there are appearances from everyone you can think of, from Newton and Leibniz to Samuel Pepys, William of Orange and Benjamin Franklin. Stephenson also mixes some different forms of writing into the novel, so that although most of the book is written in normal prose there are also some sections presented as a play or as minutes from a meeting or letters written in code.

As I said, I had been curious about this book for a while but now that my curiosity has been satisfied I can safely say that I won’t be continuing with the other two books in the trilogy! There were parts of the book that I enjoyed but overall I thought it was too much effort for too little reward – and I say that as someone who is usually happy to read big, complex books that require effort from the reader. Part of my problem could have been that I probably tried to rush through the book too quickly (if you can call spending two months on a book ‘rushing’; I started reading one day in November and finished just before the New Year). Maybe I should have tried reading it over six months or even a year, putting it aside for a while when I got bored with it – looking at other reviews, this seems to be what a lot of people recommend. But really, once I got halfway through I just wanted to be finished with it.

I should point out that I didn’t actually hate Quicksilver and there were times when I became completely immersed in its world. I enjoyed reading about the early days of the Royal Society and the work of its members and here I was reminded of An Instance of the Fingerpost by Iain Pears. There were detailed descriptions of their experiments and discoveries and we learn about a wide range of scientific topics including sundials, clocks and telling the time, the development of language and vocabulary, the formulation of the laws of gravity and the development of calculus. Most of this was fascinating (though be warned that there are some gruesome experiments on animals described in graphic detail) and I particularly loved the characterisation of Isaac Newton as an eccentric genius, forgetting to eat and sleep, and sacrificing his health in the name of science. Often, though, the story seemed to disappear under pages and pages of exposition (sometimes complete with diagrams and notes) and I felt I was reading a science textbook rather than a work of fiction.

There were also a few other things that I found very irritating, such as the spelling of the word fancy as phant’sy and the fact that, in the middle section of the book in particular, there is absolutely no attempt to use dialogue suitable to the time period. I understand that this is not your average ‘historical fiction’ novel and Stephenson probably had a good reason for his choice of language, but modern slang spoken by historical characters is something that nearly always annoys me, whatever the reason.

But the biggest problem, for me, was that the novel has no real plot – or at least, there’s no single plot that runs through the book from beginning to end. Instead there are lots of disjointed subplots, lots of ideas and concepts, but they never come together at any point to form an engaging story. When I came to the end of the book I didn’t feel the sense of accomplishment and satisfaction that I felt on finishing other long books like War and Peace, for example, or Clarissa or Les Miserables; all I felt when I finished Quicksilver was relief – and that was disappointing after the time I’d invested in it and the high expectations I’d had. On a more positive note, I do feel that I’ve learned a lot about 17th century science, religion and politics – though whether I understood it all is a different matter!

I think I’ll end this post here before it becomes as long as Quicksilver itself. Clearly there are a lot of people who have loved this book and the other two in the Baroque Cycle, so if this sounds like something you would enjoy please don’t let me put you off it!

18 thoughts on “Quicksilver by Neal Stephenson”