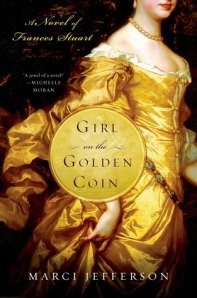 For more than three hundred years, an image of Britannia with her shield and spear or trident has been depicted on the reverse of certain British coins. In the 17th century, the model for Britannia was said to be Frances Stuart, who was described by Samuel Pepys as a great beauty and who famously refused to become a mistress of King Charles II. Girl on the Golden Coin is Frances Stuart’s story.

At the beginning of the novel, Frances is one of a family of Royalists who have been living in exile in Paris since Charles I was defeated in the English Civil War. With the Restoration of the monarchy in 1660, the Stuart family return to favour and Frances joins the household of Henriette Anne, Charles II’s younger sister, who has just married the brother of Louis XIV of France (the ‘Sun King’). When Frances catches Louis’ eye, he sends her to the English court where she is faced with the task of seducing Charles, converting him to Catholicism and helping to form an alliance between England and France.

The rest of the novel follows Frances at the court of Charles II, exploring her relationships with the King, his noblemen and the other women of the court including the young Queen, Catherine of Braganza, and the King’s favourite mistress Barbara Palmer, Lady Castlemaine. As Frances grows closer to Charles and begins to replace Castlemaine in his affections, she finds herself under pressure from the Queen Mother, the French ambassadors and various courtiers to use her influence with the King to help further their political intrigues – and failure to do so could result in her own family secrets being exposed.

Girl on the Golden Coin is Marci Jefferson’s first novel and was only published in February, but has been attracting some excellent reviews already. I can see its appeal, but unfortunately I didn’t enjoy it as much as most other readers have. It was fun to read but it was too light for me and didn’t have the depth I prefer in my historical fiction – although to be fair, that’s what I had suspected before I started reading but decided to still read it anyway as the Restoration is such an interesting period of history and I had never come across a book written from Frances Stuart’s perspective before.

I suppose given who Frances was and her position at court, it’s understandable that so much of the novel concentrates on her love life, but I would personally have preferred less romance, fewer descriptions of pretty silk dresses and beautiful jewels, and more focus on the history. The novel does touch on important issues such as religious conflict (in the form of two of Frances’ servants, one of whom is a Catholic and the other a Quaker), and the Anglo-Dutch War but I was disappointed that there were only a few pages devoted to some of the most significant historical events Frances lived through, such as the Great Plague and the Great Fire of London. I couldn’t help making comparisons with Forever Amber by Kathleen Winsor, another historical romance set at the court of Charles II, but which captures the drama and atmosphere of the Restoration period in a way which, in my opinion, this book doesn’t.

I don’t want to sound too negative because I didn’t actually dislike Girl on the Golden Coin – it was a quick read that kept me entertained for a few days and a good introduction to the life of Frances Stuart, someone I previously knew almost nothing about. As the response to this novel so far has been overwhelmingly positive I’m sure Marci Jefferson has a very successful career ahead of her. This just wasn’t the right book for me.

Thanks to the publisher for providing a review copy via NetGalley.

14 thoughts on “Girl on the Golden Coin by Marci Jefferson”