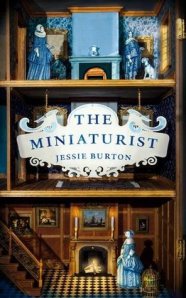 In October 1686, eighteen-year-old Petronella (Nella) Oortman travels from Assendelft to Amsterdam to join the household of her new husband, Johannes Brandt. Johannes is a merchant with the VOC – the Dutch East India Company – and spends a lot of time away from home, leaving his young wife in the company of his sister, Marin, and their two servants, Cornelia and Otto. Disappointed with the lack of affection from her husband and confused by Marin’s cold, unwelcoming reception, Nella quickly finds that married life is certainly not what she had hoped and expected it would be.

Unable, for various reasons, to give Nella the attention she deserves, Johannes presents her with a special wedding gift to help her pass the time: a cabinet containing a dolls’ house that resembles the Brandts’ own home. The little rooms are empty and it is up to Nella to decide how to furnish them. Responding to an advertisement by a ‘miniaturist’, she sends a letter with her requests, but when the tiny items and figures begin to arrive, Nella is amazed by how accurately they reflect life within the real Brandt household. How can the miniaturist possibly know so much about Nella and her family?

I was drawn to The Miniaturist by its striking cover and although the book itself didn’t quite live up to my expectations, it was certainly an unusual and intriguing story. I have seen comparisons with Tracy Chevalier’s Girl with a Pearl Earring and it’s easy to see why, as both books tell the story of a young woman living in 17th century Holland, but apart from this I don’t think the two novels really have a lot in common. While I found that Girl with a Pearl Earring felt realistic and true to life, The Miniaturist has an element of magical realism that makes it very different – and this supernatural aspect was possibly the reason why I didn’t love the book as much as I wanted to. I thought the mystery of the miniaturist’s creations was a great idea, but I felt that it was never sufficiently explained or resolved, which left me wondering if I’d missed the point.

I found a lot to like about The Miniaturist, though, particularly the setting – not a common one in historical fiction, but very interesting to read about. I learned a lot about Amsterdam in the 1600s and the world of trade and commerce in which Johannes Brandt and his fellow merchants operate. It’s quite an atmospheric novel too, and a bit darker than I’d expected; bad things happen to some of the characters in the story and not everyone gets a happy ending. Nella herself is a character who grows and changes, from an innocent, nervous young girl at the beginning of the book to a strong, mature woman at the end. And I must mention Marin, secretive and hostile, but with much more depth than is obvious at first.

I had assumed this was a purely fictional story, so I was surprised to find that Petronella Oortman was a real person and her miniature house can be seen in the Rijksmuseum in Amsterdam. As for the true story behind the house and its contents, who knows?

I received a copy of this book for review via NetGalley

16 thoughts on “The Miniaturist by Jessie Burton”