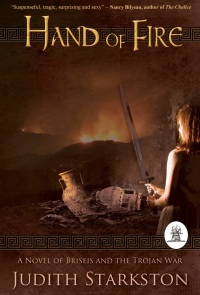 In this wonderful combination of historical fiction and Greek mythology, Judith Starkston reimagines events from the Iliad, telling the story of the Trojan War through the eyes of Briseis, a woman who plays an important role in Homer’s epic despite being only briefly mentioned. In Hand of Fire, Briseis is finally given the attention she deserves.

At the beginning of the novel, Briseis is a young priestess of the healing goddess Kamrusepa, but is sadly unable to prevent her own mother from dying. There is more sadness to follow for Briseis when she is married off to Mynes, a prince of Lyrnessos, and finds him to be a violent and abusive man. Sustained by the compassion of her elderly nurse, Eurome, and by visions of the handsome, half-immortal Greek warrior, Achilles, the turning point comes when the city of Lyrnessos falls to the Greek army and Briseis is taken captive. How can she reconcile her love for Achilles with her new position as slave?

Hand of Fire surprised me; I really didn’t expect to enjoy it quite as much as I did. I love reading historical fiction but tend not to choose books set in the ancient world. I often find that I have trouble identifying with the characters – I sometimes feel that even the non-mythological ones seem more like mythological beings than real people. That was not a problem here: this is a very human story with characters I could love and care about. Briseis herself is a great protagonist and I liked her from the beginning. She has great strength and resilience, all the more impressive when you consider everything she has to endure – the loss of her mother, marriage to a man who treats her badly, personal tragedy in the face of war, life as a captive slave, and her tumultuous relationship with Achilles.

Achilles is more difficult to understand. His personality is complex and conflicted; in battle he is a fierce, mighty warrior gripped by an unstoppable rage, but when he is alone with Briseis we see the gentler, more sensitive side of his nature. Of the secondary characters, there are two in particular that I found very well developed and memorable. One is Eurome, Briseis’ elderly maid, a caring, warm-hearted person and a devoted friend Briseis can trust and rely upon. The other is Patroklos, the beloved companion of Achilles, the only person apart from Briseis who is able to quell his rage.

This is a novel that has been thoroughly researched, which is evident from Judith Starkston’s author’s note in which she describes her reasons for writing this story, the things she discovered during the writing process and the decisions she needed to make. She does an excellent job of drawing on her knowledge of the period to create a convincing picture of what life may have been like for a woman who lived during the Bronze Age. The history of medicine is something I’ve always found very interesting, so I enjoyed the parts of the book that describe Briseis’ work as a healer (which consists mainly of using herbs and magical rituals as unlike her brother, Iatros, she is unable to study to be a physician).

Even for a reader like myself who only has a limited knowledge of Ancient Greece and hasn’t actually read the Iliad, I found this novel very accessible and easy to follow. I appreciated the fact that the author takes the time to flesh out the background to the story and doesn’t just assume that every reader will be familiar with the time period and the mythology. I was also pleased to find that there’s not too much emphasis on the battle scenes! This is Briseis’ story and the focus is on her personal life and on her relationships with Achilles, Mynes and the others. I really enjoyed spending time in her world and will be looking out for more novels from Judith Starkston in the future.

I read Hand of Fire as part of a Fireship Press Virtual Book Tour. You can find the tour schedule here.

8 thoughts on “Hand of Fire by Judith Starkston”