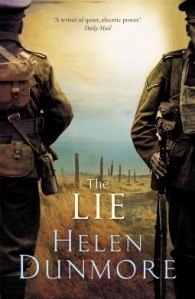 With 2014 being the centenary of the First World War, I had intended to read lots of war-related books this year. For some reason, though, that hasn’t happened; this is only the second or third I’ve read. Actually, I did start to read The Lie in January but wasn’t in the right mood for it and decided to leave it and try again later. That was obviously the correct decision because this time I was drawn into the story from the beginning.

The Lie is set in Cornwall in 1920 and tells the story of Daniel, a young man who has just returned from the war to the village where he grew up. Things have changed during his absence and both of his parents are now dead. Homeless and alone, Daniel is grateful for an offer of food and shelter from Mary Pascoe, a reclusive elderly woman who had known his mother. As Daniel works on Mary’s land in return for the help she is giving him, he has plenty of time to think and reminisce.

Some of his memories are of his childhood, growing up with Frederick and Felicia, the children from the big house where his mother worked as a cleaner. Others are more recent memories – terrible, haunting memories of the war, where he witnessed Frederick’s death in the trenches. Struggling to come to terms with what has happened to his friend, Daniel is reunited with Frederick’s sister, Felicia, now a young war widow with a little girl of her own. Felicia is also grieving, having lost both her husband and her brother, and she and Daniel are able to offer each other some comfort. But when Mary Pascoe asks Daniel to do something for her, a lie is told which could threaten his chance of future happiness.

This is a quiet, slow-paced novel and requires some patience from the reader, but Daniel is an interesting character who is worth getting to know. While the story jumps backwards and forwards in time, covering three different periods in Daniel’s life, the transitions from one to the other feel smooth and natural and each strand of the story explores several different aspects of the Great War. First there are the childhood sections which depict the class divide that existed in pre-war Britain: the intelligent, literary Daniel has to leave school at eleven to start working, while the less academic Frederick is sent to private school. The scenes that are actually set during the war describe all the horrors of life in the trenches, and finally, the parts of the story set in 1920 show us how the war has changed Daniel, his community and the wider world forever.

Daniel is our narrator but Frederick is a constant presence in the book and in Daniel’s mind. The relationship between the two men forms a big part of the story and the circumstances of Frederick’s death (leading to another lie being told) haunt Daniel to the point where he imagines he sees his old friend standing by his bed covered in the mud of the trenches. But I particularly liked the portrayal of Frederick’s sister, Felicia, and can only imagine how difficult life must have been for a young woman, widowed and alone with a baby to raise amid the aftermath of war.

Although I did find a lot to like about The Lie, it didn’t quite have the emotional impact on me that I would have expected from a novel dealing with such a tragic subject and for that reason I can’t say that I loved this book. It’s the first Helen Dunmore book I’ve read, though, and I’m hoping I might enjoy one of her others more than this one.

12 thoughts on “The Lie by Helen Dunmore”