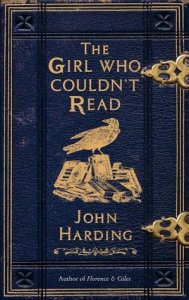 Three years ago I read John Harding’s Florence and Giles and loved it, so I was pleased to find a copy of The Girl Who Couldn’t Read in the library. It’s a sequel and will make more sense if you’ve read Florence and Giles first, but don’t worry if you haven’t because it should still work perfectly well as a standalone.

The story is set in the 1890s and is narrated by Doctor Shepherd, who has just arrived at his new job in a women’s mental hospital on an isolated island in New England. Taking a tour of the hospital’s facilities with his new colleague, Doctor Morgan, he is appalled by some of the methods being used to control the patients. When he tells the other doctor of his concerns, Morgan agrees to an experiment: Shepherd can choose one of the women to work with using his own methods in an attempt to prove whether gentle, humane treatment can be as effective as harshness and brutality.

The patient Doctor Shepherd picks for his experiment is a young girl known as Jane Dove – she says she can’t remember her real name, her age or anything about her past. She is also unable to read (and claims that she has never been allowed to learn) and, according to Doctor Morgan, she can’t even use the English language correctly. It seems Shepherd’s task could turn out to be a lot harder than he’d expected! After spending some time with Jane, though, he begins to realise that while the girl’s speech is unconventional, the way she uses nouns and verbs actually makes perfect sense.

She invented new words from old, often by changing the way they were used. She said “we outsided” rather than “we went outside”, or “I downstairsed” in place of “I went downstairs”, both of which I found perfectly clear and actually more economical than the conventional expression.

Jane immediately reminded me of a character from Florence and Giles – another girl who used language in a creative and unusual way. As Doctor Shepherd continues to work with her, encouraging her to search her memory and giving her books to look at, the connection between Jane and that other girl becomes clear. But what about Shepherd himself? It’s obvious from the very first chapter that he is not who he says he is either…and possibly not even a doctor at all!

I love books with unreliable narrators and Doctor Shepherd is a very intriguing one. We know that he is unreliable, we know that he is not being honest with us – but we don’t know why and we don’t know who he really is. The truth about Shepherd isn’t revealed until near the end of the novel, but along the way there are plenty of plot twists and surprises! And to make things even more interesting, Doctor Shepherd and Jane Dove aren’t the only people in the story with secrets to hide; there’s also a third mystery and this one made me think of a classic Victorian novel – an impression that grew stronger as the story progressed.

The Girl Who Couldn’t Read is a great book – it’s maybe not quite as good as Florence and Giles but it comes very close! I did wonder whether the setting might make it too similar to The Asylum by John Harwood, which I read just a few weeks ago, but fortunately they are two very different novels with very different plots and characters. I thoroughly enjoyed them both!