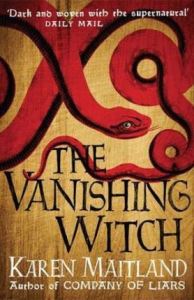 Karen Maitland is an author I’ve been meaning to try for a while. With two of her novels on my tbr pile to choose from, I decided to start with this one, The Vanishing Witch, as it had been waiting the longest.

The story is set in Lincoln and covers the period between September 1380 and September 1381. As you may know, 1381 was the year of the Peasants’ Revolt when large sections of the English population rebelled in protest against excessive taxes. I actually read a non-fiction book about the Revolt just before Christmas – England, Arise by Juliet Barker – and this provided me with a lot of background knowledge. However, even if you know nothing about this period of history, you should still find The Vanishing Witch easy enough to follow. The Revolt does play an important part in the plot, but this is first and foremost the story of fictional Lincoln wool merchant, Robert of Bassingham, and his family.

When an attractive widow called Catlin asks Robert for advice regarding an investment, the merchant is only too pleased to help. Despite his reassurances to his wife, Edith, that his relationship with Catlin is purely business-related, he soon finds himself falling in love and it’s not long before the widow, her young daughter Leonia and adult son Edward have become part of Robert’s household. With Edith seriously ill, Robert’s two sons, Jan and Adam, become suspicious of Catlin’s motives – a suspicion shared by the family servants.

A few miles away, in the village of Greetwell, another man is also facing difficult times. His name is Gunter and he is a boatman, responsible for collecting and delivering cargoes of cloth. Work has been sparse lately and when the King’s commissioners arrive in the village, Gunter knows he will struggle to pay his taxes…

I found The Vanishing Witch a very entertaining and enjoyable novel and am quite happy with my first introduction to Karen Maitland’s work. There were plenty of things to like – the time period (not a very popular choice for historical fiction, which made it all the more interesting), the dark atmosphere, the touches of the supernatural, and the plot, which twists and turns as secrets are uncovered and revelations are made. I particularly loved the way Maitland altered my perceptions of the characters as the focus moved from one to another; she made me wary of some of them from the beginning, but I was never quite sure whether or not that wariness was justified!

By telling the stories of both Robert of Bassingham – a wealthy merchant – and Gunter, one of his workers, Maitland is able to explore what life was like in the 14th century for people at different levels of society. However, while the mystery revolving around Robert and Catlin was compelling, the storyline surrounding Gunter’s family and the Peasants’ Revolt felt less developed. This subplot had the potential to be as interesting as the other one and I was disappointed that it wasn’t explored in as much depth.

I’ve mentioned that the author has added some supernatural touches to the novel: each chapter begins with a superstition, a piece of folklore or a description of a spell. These don’t have a lot of direct significance to the story but they are fun to read and are part of the overall atmosphere of the book. There are also some sections of the novel narrated by a ghost, whose identity and role in the story we don’t learn until the end of the book. I didn’t guess who the ghost was and I was surprised when I discovered the truth!

So will I be reading more Karen Maitland? Yes, of course! I’ll start with her new one, The Raven’s Head, then go back to explore her earlier novels.

9 thoughts on “The Vanishing Witch by Karen Maitland”