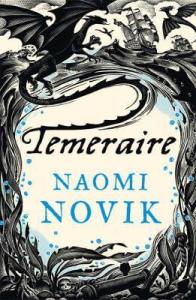 Temeraire (also published as His Majesty’s Dragon) is the first in a series of nine books and is set during an alternate version of the Napoleonic Wars. This alternate world is exactly like our own in almost every detail, but with one very important difference – the existence of dragons. These dragons are intelligent creatures, capable of human speech and independent thought, and are used by both the British and French to provide aerial support to their navies. This first novel explores the beginning of a very special relationship between Captain Will Laurence and his dragon, Temeraire.

When we first meet Laurence he is a Captain in the Royal Navy and has just captured a French ship which happens to be carrying an unhatched dragon egg. The egg is very close to hatching and Laurence knows that if the dragon is to be tamed (and therefore of use to Britain’s Aerial Corps) it’s essential that it is harnessed and made to accept a human handler as soon as possible. The thought of becoming an aviator is not something that appeals to Laurence – as well as requiring total dedication, leaving little time for a family life, aviators are treated with scorn and contempt by the rest of the military. Unfortunately, the newly-hatched dragon refuses to accept any other handler so Laurence, after naming him Temeraire, reluctantly resigns himself to his new career and new way of life.

The rest of the novel follows the adventures of Laurence and Temeraire as they begin their training with the Aerial Corps in Scotland, learning all the flying manoeuvres and formations they will need to know before being called into service. This does feel very much like the first in a series and although Laurence and Temeraire do have the opportunity to take part in some action towards the end of the novel, the main purpose of the book seems to be to set the scene and introduce us to the concept of dragon warfare. This doesn’t mean that I thought the book was boring, though – quite the opposite: I found all the details of dragon training fascinating and now that I know how things work in the world of Temeraire I’m looking forward to continuing with the series.

I particularly enjoyed meeting all the other aviators and dragons who form the Aerial Corps including Captain Harcourt and her Longwing dragon, Lily (the presence of female aviators is something Laurence has to adapt to, having been used to the male-dominated Navy), Berkley and his Regal Copper, Maximus, and the training master, Celeritas, who is himself a dragon. One of my favourites was Levitas, a little dragon who has been neglected by his selfish captain and is desperate for some love and affection.

Most of all, I loved watching the relationship develop between Temeraire and Laurence as they come to trust and understand each other. There are some intriguing revelations about Temeraire at the end of the novel that make me want to pick up the second book in the series, Throne of Jade, as soon as possible!

I read Temeraire for Week 1 of the Forgotten Histories Reading Challenge.

22 thoughts on “Temeraire by Naomi Novik”