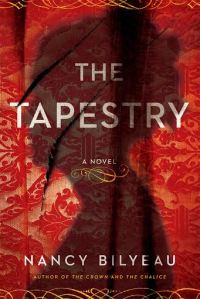 The Tapestry is the third book in Nancy Bilyeau’s wonderful Joanna Stafford trilogy, which is set in Tudor England and follows the adventures of a former Dominican novice whose life has been torn apart with the dissolution of the monasteries. I loved both of the previous books in the series – The Crown and The Chalice – and had been looking forward to reading this one for more than two years. I’m pleased to be able to say that it was worth the wait!

When we first met Joanna Stafford in The Crown, she was Sister Joanna, a novice nun at Dartford Priory. With the priory under threat of closure by Henry VIII and Thomas Cromwell, Joanna became embroiled in a quest to find the legendary crown of Athelstan. Then, in The Chalice, she learned of her role in a mysterious prophecy and found herself caught up in another dangerous plot. As The Tapestry begins, Joanna is hoping to avoid any more involvement in quests and conspiracies. All she wants to do is settle down to a peaceful life in Dartford, weaving her tapestries and caring for her cousin’s little boy, Arthur. Unfortunately, people more powerful than herself have other plans for Joanna…

It seems that Joanna’s tapestries have come to the attention of King Henry VIII, who summons her to Whitehall Palace with a special commission. Almost as soon as she arrives at court, however, she discovers that her life is still in danger. Someone in the palace is spying on her – but who and why? Meanwhile, Joanna’s close friend Catherine Howard has also come to court and it is thought that the King is about to make her his fifth wife. Remembering the fates of Henry’s previous wives, Joanna is determined to do whatever she can to protect her friend as well as herself.

Like the first two Joanna Stafford novels, this is an exciting and compelling story. There are so many books set in the Tudor period that it must be difficult to find a new way to approach the subject, but this is exactly what Nancy Bilyeau has done here. I would describe these books as historical thrillers, as they are not exactly mysteries in the traditional sense – although they do all have an element of mystery in them, in this case the question of who is trying to harm Joanna. What really makes them stand out for me is Joanna herself; she’s such an interesting character, being both a former nun and also a member of the Stafford family – a niece of the late Duke of Buckingham and therefore related to the King himself.

As usual, the historical background has been well researched and some of the important events of the period are incorporated into the story, including Henry VIII’s fourth and fifth marriages to Anne of Cleves and Catherine Howard, and the downfall of Thomas Cromwell. We get some insights into what is going on elsewhere in Europe too, first through the character of the artist Hans Holbein who befriends Joanna at Whitehall, and later when Joanna embarks on a journey across Germany, a land badly affected by famine and unrest.

The Tapestry is not a romance, but there are two men who have been possible love interests for Joanna since book one – the former Dominican friar and apothecary Edmund Sommerville and constable Geoffrey Scovill. I have enjoyed watching Joanna’s relationships with both Edmund and Geoffrey develop throughout the three novels and in this final book Joanna has an important choice to make which will bring this thread of the series to a conclusion.

If you’re new to these books I would recommend reading The Crown and then The Chalice before you pick up The Tapestry; that way you’ll be able to follow Joanna’s story from the beginning. I have loved the whole trilogy and am sorry to have reached the end of Joanna’s adventures now, but I’ll look forward to reading whatever Nancy Bilyeau writes next!

I read The Tapestry as part of the Historical Fiction Virtual Book Tour. Please see the tour schedule for details of more reviews, interviews and guest posts.

Now here’s your chance to win one of three signed hardcover copies of The Tapestry.

You can enter the giveaway here: https://gleam.io/iyF4a/the-tapestry

Rules:
Giveaway starts on March 16th at 12:01am EST and ends at 11:59pm EST on April 3rd.
Giveaway is open to residents in North America and the UK.
You must be 18 or older to enter.
Winners will be chosen via GLEAM on April 4th and notified via email.
Winners have 48 hours to claim prize or new winner is chosen.

7 thoughts on “The Tapestry by Nancy Bilyeau (with giveaway)”