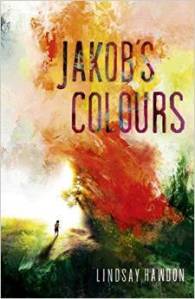 There are many, many novels which deal with the subject of the Jewish Holocaust, but in Jakob’s Colours Lindsay Hawdon explores another very important but largely forgotten piece of wartime history – the Gypsy Holocaust.

Beginning in Austria in 1944, she introduces us to an eight-year-old boy called Jakob. Part Roma and part Yenish, Jakob’s world has been torn apart by the horrors of war. He is running for his life across the Austrian countryside, and as he runs, he clings to his father’s words: “Don’t be afraid, Jakob. See the colours”.

But Jakob’s is not the only story to be told here. We also go back in time to the 1920s where we get to know Jakob’s mother, Lor, and learn of her troubled childhood in England. Later, in a Swiss hospital, Lor meets Yavy, the gypsy who becomes Jakob’s father, and we follow their relationship from its beginnings up to the point where Jakob finds himself alone and on the run.

Jakob’s Colours is very different from any other World War II novel I’ve read – a real accomplishment when you consider the sheer number of books set in this period. I previously knew nothing at all about the fate of the gypsies during the war (like most people, when I think of the Holocaust I tend to think of the Jews) so it’s great to have been given this opportunity to learn something new. However, I struggled with the structure of the novel. The story constantly moves back and forth in time, with each chapter titled either This Day, Before or Long Before, which I found quite confusing and difficult to follow. It felt disjointed and it meant that I never became as fully immersed in the lives of the characters as I would have liked.

I’m disappointed that I wasn’t able to love Jakob’s Colours, especially as the historical background is so fascinating and the subject matter so poignant. It was definitely my problem with the jumping around in time that prevented me from loving it; I’m sure I would have enjoyed the book a lot more if only the story had been told in chronological order. I did still find a lot of things to admire, though – the writing is very poetic and quite beautiful in places, and I liked the colour imagery that runs throughout the novel.

Most of all, I liked the concept that however bad things become we need to continue to hope and to look for the good things in life…to see the colours.