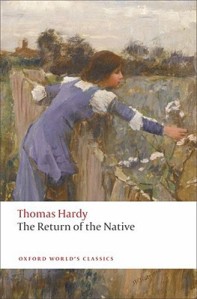 Egdon Heath, part of Hardy’s fictional Wessex, is a wild and haunting place, steeped in history and superstition. Many of the people who live and work there love the heath and appreciate its beauty, but there are some – including Eustacia Vye – who find the loneliness oppressive. Eustacia, who lives with her grandfather in an isolated cottage on the heath, is desperately looking for a way to escape and believes she has found it in Clym Yeobright.

Clym is the returning native of the title, home for Christmas from Paris where he has been working as a diamond merchant. Clym, who dislikes the diamond trade, is planning to stay at home and become a schoolmaster, but Eustacia sets her sights on marrying him in the hope that she can persuade him to take her back to Paris. After all, there is nothing to keep her on Egdon Heath now that her former lover, the innkeeper Damon Wildeve, has married Clym’s cousin, Thomasin.

Clym’s mother, Mrs Yeobright, is opposed to the idea of both marriages – her son’s with Eustacia and her niece’s with Wildeve – but although she reluctantly accepts Thomasin’s decision, a series of misunderstandings and disagreements damages her relationship with Clym and this will have tragic consequences.

I have mentioned five of the novel’s six main characters so far: the sixth is Diggory Venn, a reddleman (a seller of red ochre, which farmers use to mark their sheep). Diggory is in love with Thomasin and remains quietly devoted to her even after she marries Wildeve. The lives of these six people will draw closer together, with the actions of each one impacting on all of the others. For some, there will be a happy ending, but for others there will be only unhappiness and tragedy.

The Return of the Native was Thomas Hardy’s sixth published novel and first appeared as a serial in 1878. I’ve read almost half of his novels now and always enjoy my visits to Wessex and my glimpses of rural life in the 19th century. This book has a very memorable and atmospheric setting, with the heath itself being at the centre of the story. The way in which the lives of the characters are shaped by the heath is one of the driving forces of the plot, particularly as Clym and Eustacia have such different feelings about it:

Take all the varying hates felt by Eustacia Vye towards the heath, and translate them into loves, and you have the heart of Clym.

A common theme in Hardy’s novels is the progress of the industrial revolution and nostalgia for a way of life that, even in Hardy’s day, was rapidly disappearing. An example of this in The Return of the Native is the character of Diggory Venn, the reddleman, whose skin and clothes are stained with the red dye that he sells.

The traveller with the cart was a reddleman — a person whose vocation it was to supply farmers with redding for their sheep. He was one of a class rapidly becoming extinct in Wessex, filling at present in the rural world the place which, during the last century, the dodo occupied in the world of animals. He is a curious, interesting, and nearly perished link between obsolete forms of life and those which generally prevail.

We also meet some of the local people who live on Egdon Heath – many of whom work as furze (gorse) cutters. These characters provide some moments of comedy and also allow Hardy to explore some of the superstitions, customs and traditions of the region (one of the most memorable scenes occurs near the beginning of the book when dozens of bonfires are lit all around the heath).

As I mentioned above, not all of the characters in the novel are rewarded with a happy ending – but this is something you have to be prepared for with Hardy. The story does finish on a more positive note, although it was interesting to read the footnote at the end explaining that the ending was originally going to be slightly less positive and was changed during the serialisation of the novel.

I loved The Return of the Native, though not as much as some of the other Hardy novels I’ve read. I have one more to read on my Classics Club list – The Woodlanders – which I’m looking forward to reading.

16 thoughts on “The Return of the Native by Thomas Hardy”