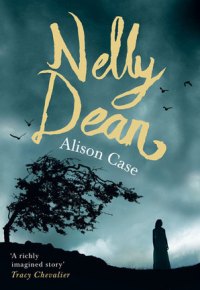 I have always loved Wuthering Heights by Emily Brontë. Not everyone does, I know – it seems to be a book that people either love or hate – but ever since I first read it at the age of twelve it has remained one of my favourites. That’s why, when I heard about Alison Case’s new book, Nelly Dean, I knew I wouldn’t be able to resist reading it despite my usual dislike of prequels, sequels and re-tellings of classic novels.

Nelly Dean, as those of you who have read the Brontë novel will remember, was the housekeeper at Thrushcross Grange who entertained Mr Lockwood with the story of Cathy, Heathcliff and the other inhabitants of Wuthering Heights. This new novel is written in the form of a letter to Mr Lockwood in which Nelly tells the parts of the story that weren’t told or that were brushed over in Wuthering Heights.

Nelly begins by talking about her childhood and her relationship with her parents. To keep her away from her abusive father, her mother is happy for her to spend most of her time at Wuthering Heights with the Earnshaw children, Hindley and Cathy. Later, Nelly becomes housekeeper for the Earnshaws, but by this time life at Wuthering Heights is changing significantly. First, Mr Earnshaw comes home from a trip to Liverpool with an orphan boy called Heathcliff, and then Hindley – with whom Nelly is falling in love – goes away for several years and breaks her heart when he returns.

The rest of the novel follows Nelly as she struggles with her feelings for Hindley and her own change of status in the Earnshaw household from friend to servant. The major events of Wuthering Heights are covered, but in far less detail than in the original; Heathcliff and Cathy are pushed into the background so that the focus is on Nelly and her personal story. And this, I think, is why I had a problem with this book. There’s a reason why Emily Brontë chose to write about Heathcliff and Cathy rather than Nelly: it’s because Nelly’s story is just not as interesting. The novel started off promisingly enough but by the time I’d read several chapters devoted to Nelly’s attempts to find a wet nurse for baby Hareton, I was bored. Even the hints of a shocking family secret in Nelly’s past failed to interest me, mainly because it was far too easy to guess what that secret was.

There were things that I liked, of course. I liked the overall concept of the book – the idea of taking a beloved classic and reading between the lines to fill in the gaps and to bring a new interpretation to a well-known story. I liked Nelly herself; she is much easier to warm to than the Nelly of Wuthering Heights, and while the original character can be seen as an unreliable narrator, there’s a sense that this Nelly is being more open and honest with the reader. And I liked some of the minor characters, particularly Bodkin (Robert Kenneth), the doctor’s son who befriends Nelly. But the novel lacked the drama and the Gothic atmosphere I associate with Wuthering Heights and, although it was well written, there was none of the passion I admire so much in Emily Brontë’s writing.

Having finished this book and written my review, I decided to have a look and see what other readers thought of it. It seems that most people loved Nelly Dean and some even prefer it to Wuthering Heights, so I am clearly in the minority and wouldn’t want to put anyone off trying it for themselves. I couldn’t help feeling that I would have enjoyed this novel more if it had been presented as an original work of historical fiction with the names of the characters changed and the references to Wuthering Heights removed. The Victorian period is a big favourite of mine and if Alison Case decides to write a second book set in that era – one that is not based on another book – I will happily read it.