I certainly wouldn’t, based on the stories of the two 16th century queens I’ve been reading about recently! 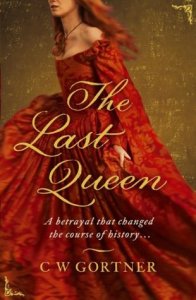 The first of our two queens is Juana of Castile, also known as Juana la Loca (‘the mad’), whose life is retold in fictional form in The Last Queen by C.W. Gortner. I think most of us will have heard of Juana’s younger sister, Katherine of Aragon, the first wife of Henry VIII who was divorced so that the King could marry Anne Boleyn, breaking away from Rome in the process. Juana’s story is less well known (outside Spain, at least) and less often covered in historical fiction, but just as interesting and tragic.

Juana is the third of five children born to Queen Isabella and King Ferdinand of Spain, whose joint rule has brought together the two Spanish kingdoms of Castile and Aragon. The King and Queen have arranged marriages for all of their children, in the hope of forming political alliances, and Juana finds herself married against her will to Philip, Duke of Burgundy, son of the Holy Roman Emperor. Despite her initial feelings, Juana quickly falls in love with her new husband – but her happiness doesn’t last long. The deaths of her elder brother and sister leave Juana as her parents’ heir and her relationship with Philip changes as a result.

Influenced by the scheming Archbishop Besançon, Philip sets his sights on taking the throne of Spain for himself and Juana finds herself betrayed and accused of insanity. Even as she discovers that the very people she should be able to trust want only to bully and manipulate her, she remains determined to fight for her throne and her country.

This is the first of C.W. Gortner’s books I’ve read and I will definitely consider reading more. I thoroughly enjoyed this moving and dramatic novel which took me through a period of Spanish history of which I previously knew almost nothing. There’s some beautiful descriptive writing which brings each of the various settings to life, from Granada during the Conquest of 1492 to the extravagance of the French court.

Gortner is a male author, if you’re wondering, and he writes very convincingly from the perspective of a young woman in this novel. Whether or not Juana actually suffered from mental illness is debatable; the point of view taken in this book is that the ‘madness’ developed as a result of years of stress and suffering – and branding her mad was a convenient way for her enemies to prevent her from ruling. I don’t know enough about her to say whether this is likely or not, but I did love Gortner’s portrayal of Juana and wished she could have had a little more happiness in her life.

Our second queen is Katherine Parr, sixth and final wife to Henry VIII, whose story is told in The Taming of the Queen by Philippa Gregory. I hadn’t really intended to read this book as I find Katherine one of the less interesting wives and, having read several other fictional accounts of her life (including Queen’s Gambit by Elizabeth Fremantle and The Secret Keeper by Sandra Byrd), I didn’t imagine this one would have anything new to add. When I saw it in the New Books section of the library, however, I couldn’t resist reading it – and I’m pleased I did as I found it to be one of Gregory’s better Tudor court novels.

Katherine Parr (or Kateryn as her name is spelled in this book) could be seen as one of Henry’s luckier wives, outliving the King and managing to avoid both divorce and beheading, but this doesn’t mean that she was happy or that she didn’t fear for her life at times. By this stage of his life Henry is, shall we say, past his prime: Gregory describes (sometimes in too much detail!) his gluttony at banquets, his bodily functions and the smell of his ulcerated leg. Add to this his temper, unpredictable behaviour and obsession with his third wife, Jane Seymour, and you can see how difficult things are for poor Kateryn, especially as she has been forced to give up her secret love for Thomas Seymour.

Kateryn finds some comfort in getting to know her new stepchildren – Mary, Elizabeth and Edward – and restoring them to their places at court, and also in religious study. She welcomes preachers to her rooms (including Anne Askew, who was later burned at the stake) and as a result of this narrowly escapes death herself; she debates religious reform with her ladies and sometimes with the King himself; and she writes several books, becoming the first Queen of England to publish under her own name.

Kateryn is an intelligent and mature woman who has already been widowed twice before her marriage to Henry and she is able to tolerate her situation and handle the King’s whims in a way that a younger, less experienced girl may not have done. I liked her, but I felt that there were times when Gregory attributed words and actions to her that didn’t feel consistent with the way her character was being portrayed. This made me think that maybe she is more comfortable writing from the perspective of younger, livelier narrators.

This is an entertaining read and if you’ve never read about Katherine Parr before, it provides a good overview of her life and of the final years of Henry’s reign (events such as the sinking of the Mary Rose are covered in dramatic detail). I did prefer Elizabeth Fremantle’s Queen’s Gambit, though, and would recommend that book ahead of this one.

Have you read any other novels about Juana of Castile or Katherine Parr? Which are your favourites?