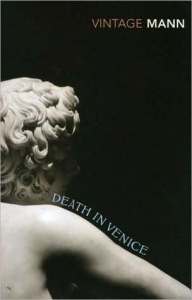 When I decided to participate in this year’s German Literature Month (hosted by Caroline and Lizzy) I discovered that I already had two books by German authors unread on my shelves: Death in Venice and Other Stories by Thomas Mann and Wolf Among Wolves by Hans Fallada. I chose the Thomas Mann simply because the book was a lot shorter and I could be sure of finishing it before the end of the month, but now that I’ve read it I wish I had gone with my heart and chosen Hans Fallada, whose books I have read before and loved. I did find a lot to like and appreciate in Mann’s writing, but I’m not convinced yet that he’s really an author for me.

As well as the title novella, Death in Venice (1912), this edition includes six other stories by Thomas Mann. I read all of them, but will concentrate here on Death in Venice as it is by far the most famous story in this collection and the one I was most interested in reading.

Death in Venice tells the story of Gustav von Aschenbach, an ageing author suffering from writer’s block. He decides to travel in the hope that it will clear his mind and provide inspiration and the destination he settles on is Venice. Mann’s descriptions of Venice are beautifully written, even though at the time of Gustav von Aschenbach’s arrival the weather is dark, gloomy and oppressive, matching the overall mood of the story. I have been to Venice myself, so I found the descriptions of Aschenbach’s approach over the lagoon, his ride in the gondola and his trip across to the Lido particularly vivid.

While in Venice, von Aschenbach becomes intrigued by Tadzio, a beautiful young Polish boy who is staying with his family in the same hotel. Day by day, his infatuation with Tadzio grows; he finds himself watching out for the boy entering the breakfast room each morning and then tries to secretly follow him around Venice. Even when he learns that it may not be safe to remain in the city any longer, von Aschenbach is unable to tear himself away from Venice and Tadzio…and eventually, as the title suggests, his obsession will lead to a death in Venice.

Reading Death in Venice in 2015, it’s difficult not to feel disturbed by the story of a middle-aged man’s infatuation with a teenage boy – although I should point out that Aschenbach never touches or even speaks to Tadzio. The focus is on Aschenbach’s private feelings for the boy and how he chooses to deal with those feelings. I think at least part of his obsession can be attributed to an appreciation of beauty and the despair of a man who is growing older, knowing that his own youth is lost forever (towards the end of the novella, we see Aschenbach dye his hair and cover his wrinkles with make-up in an attempt to look younger). I found out after finishing the story that it was based on Thomas Mann’s real-life experiences and this made me think again about what he was trying to say and how he may have wanted it to be interpreted.

I found the other six stories in this collection a bit uneven, but they are all worth reading. Little Herr Friedemann (1897) – one of the earliest examples of Mann’s work included in the book – is a sad story of a man who was dropped on the floor as a baby and grew up with physical disabilities. Herr Friedemann has learned to cope with his lot in life and things aren’t going too badly for him…until he falls in love. The Joker (also 1897) has some similar themes, but I have to admit the details of this particular story have faded from my mind just a few days after reading it.

The Road to the Churchyard (1900) is a very short story about a widower who sets out to visit the churchyard and becomes irrationally angry with a boy (referred to only as ‘Life’) who is riding his bicycle along the path. This is followed by Gladius Dei (1902), in which a man called Hieronymus enters an art gallery in Munich and loses his temper when he sees a piece of immoral artwork displayed in the window.

Tristan (1903), one of the longer stories in the book, is a love story set in a sanatorium. It contains allusions to the legend of Tristan and Iseult, as well as some musical references and an exploration of attitudes towards life and death. Finally, Tonio Kröger (1903), another novella, follows the course of a man’s life from childhood to adulthood and, like Death in Venice, has some autobiographical elements.

I’m pleased to have finally read some of Thomas Mann’s work, but I found this an interesting book rather than an enjoyable one. I am not a huge fan of short story collections, though, so now I’m wondering whether I would have a better experience with one of his longer novels.