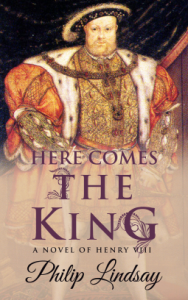 Philip Lindsay (1906-1958) was an Australian author of historical fiction. His books have been out of print in recent years but are now being made available to a modern audience in ebook form by one of my favourite independent publishers, Endeavour Press. Here Comes the King, a 1933 novel about Katherine Howard and Thomas Culpeper, is the first of his books that I’ve read.

Katherine (or Catherine, but I’m sticking to the spelling used in the novel) is a young woman of seventeen or eighteen when she marries Henry VIII at Oatlands Palace and becomes his fifth wife. Her predecessor, Anne of Cleves, has recently been set aside by the king, who believes he was misled as to her appearance. The new queen’s beauty and youthful spirit are much more pleasing to Henry, who calls her his ‘rose without a thorn’. Katherine, though, is less enamoured with her fat, gluttonous, fifty-year-old husband who is suffering from painful leg ulcers and whose moods are becoming increasingly volatile. Although Henry is not generally unkind to her, she is tempted into an affair with the handsome young courtier, Thomas Culpeper – an affair which will lead to both their downfalls.

Here Comes the King is written in the third person from the perspective of several different characters including Culpeper, Henry and Katherine herself, as well as Will Sommers, the king’s fool, Francis Dereham, another man once romantically involved with Katherine, and Jane Boleyn, Lady Rochford, who helps to arrange Katherine’s secret meetings with Culpeper. Jane and Sommers were both in a difficult position, knowing or suspecting what was going on and unsure of what to do with that knowledge, and this made them interesting characters to read about.

However, I felt that I didn’t get to know Katherine very well. She is portrayed as a pretty, flirtatious, immature young girl, and while this does seem to be a widely held view of what the real Katherine was like, I would still have preferred her character to be given a little more depth. Even when she was the viewpoint character, I never felt that I really knew what she was thinking. Culpeper’s character is better written; he is shown in a negative light, being irresponsible, impulsive and a heavy drinker (and allegedly guilty of both rape and murder, although these things are only briefly mentioned as they happen outside the scope of the novel), but his thoughts and feelings come through strongly.

I am far from being an expert on Katherine’s life and her time as Henry’s queen, so I can’t really comment on Lindsay’s accuracy, but the story did seem to follow quite faithfully the general outlines of Katherine’s and Culpeper’s lives. He incorporates things which are known to be historical fact, such as the text of Katherine’s incriminating letter to Culpeper (complete with grammatical mistakes; she is thought to be the least well educated of Henry’s wives) as well as things which may or may not be true but which have become part of the legends surrounding Katherine: practising laying her head on the block the night before her execution, for example, and declaring that “I die a Queen, but I would rather have died the wife of Culpeper”.

I had no problems with Lindsay’s writing (it’s slightly flowery and over-descriptive in places but otherwise feels surprisingly contemporary for a 1930s book) and I would read more of his work, but I didn’t find this particular novel very compelling, maybe because it’s so romance-centred. Admittedly, it would be difficult to write a book about Katherine Howard and not focus on her love affairs; as she spent such a short period as queen and died so young, she left less of a legacy than some of Henry’s other wives, and I think this is why her story has never appealed to me very much. Maybe one of Lindsay’s other novels would interest me more than this one did.

I received a copy of this book for review via NetGalley.

12 thoughts on “Here Comes the King by Philip Lindsay”