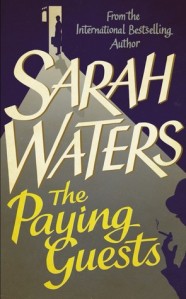 This is Sarah Waters’ sixth novel, published in 2014. I have read and enjoyed all of her previous five, but after seeing some very mixed reviews of The Paying Guests around the time of publication, I decided I wasn’t in any hurry to read this one. I knew I would read it eventually, but I wanted to wait until I was in the right mood for it.

This book is set in London in 1922 which I was pleased about as, surprisingly, I have preferred Sarah Waters’ 20th century novels (The Little Stranger and The Night Watch) to the Victorian ones (Fingersmith, Affinity and Tipping the Velvet). I always find the 1920s an interesting decade to read about; it was so soon after the end of the war and, for most people, life would never be the same again.

In The Paying Guests we meet twenty-six-year-old Frances Wray, a young woman whose life has certainly been affected by the war – her two brothers were killed in action and her father died not long after, leaving Frances and her mother alone and struggling financially. Frances is now doing the work that the servants used to do and, to avoid having to sell the house, she and her mother have decided to take in lodgers or ‘paying guests’.

The paying guests are a young married couple, Leonard and Lilian Barber, and from the moment of their arrival the atmosphere in the house changes. The Barbers belong to what Frances calls the ‘clerk class’ and they have different views, different attitudes and different ways of living their lives. Sarah Waters captures perfectly what it feels like to suddenly have to share your home with strangers:

Water was run after that, and then another odd noise started, a sort of pulse or quick pant – the meter again, presumably, as the gas ran through it. Mrs Barber must be boiling a kettle. Now her husband had joined her. There was conversation, laughter… Frances caught herself thinking, as she might have done of guests, Well, they’re certainly making themselves at home. Then she took in the implication of the words, and her heart, very slightly, sank.

As Frances gets to know the new lodgers, she finds herself increasingly attracted to Lilian. Having ended an earlier romance with another girl, Christina, for the sake of her family, Frances is determined not to let another chance of happiness slip away. This time, though, she faces not only the disapproval of her mother, but also an even bigger obstacle in the form of Lilian’s husband, Leonard.

The relationship between Frances and Lilian develops slowly throughout the first half of the novel. Although it’s difficult to tell what Lilian is truly thinking or feeling, there’s no doubt about the intensity of Frances’s emotions. While I can’t say that I particularly liked Frances, I did feel worried for her: she had already been through so much in the past and I could sense that there would be more trouble coming her way in the future. And I was right. The tension builds and builds in the Wray household and there is the sense that something big and significant is going to happen. Eventually something does happen (something horrible, dramatic and shocking) and from that point the plot begins to go in a very different direction.

The second half of the book is still interesting and compelling in its own way, but it does feel like an entirely different story and I think I might have been happier if this had continued to be the quiet 1920s domestic novel it seemed to be at the beginning. I did enjoy The Paying Guests, though, and I’m intrigued by the list of books Sarah Waters mentions as her influences; I’m particularly interested now in reading A Pin to See the Peepshow by F. Tennyson Jesse.

12 thoughts on “The Paying Guests by Sarah Waters”