On Friday I mentioned that I was taking part in the latest Classics Spin. The idea of the Spin was to list twenty books from my Classics Club list, number them 1 to 20, and the number announced today (Monday) represents the book I have to read before 1st August 2016.

The number that has been selected by the Classics Club this time is #15, which means the book I’ll be reading is: 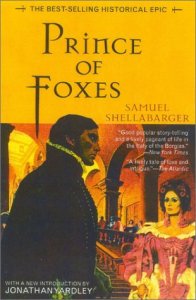 Prince of Foxes by Samuel Shellabarger

This is what the book is about:

Prince of Foxes, set in Renaissance Italy, is the fast-paced, suspenseful story of Andrea Orsini, a peasant boy who rises far and becomes a secret agent for the cunning and powerful Cesare Borgia, who entrusts him with the most delicate political, military and romantic missions. It is a classic of American popular fiction. When first published in the mid-twentieth century, it became an instant best-seller and was turned into a hit movie with Orson Welles cast as Borgia and Tyrone Power as Orsini.

One of the things I like about the Classics Club is that each individual member can decide how they want to define a classic. As well as conventional classics, my own list also includes modern classics, ‘forgotten’ classics, and books like this one, which are classic historical fiction. I’m very pleased that the spin has chosen Prince of Foxes for me as I’ve had a copy on my shelf for a long time and have just never managed to get round to reading it. I’ll do my best to read and review it sometime in June or July, but I want to finish Kristin Lavransdatter, my book from the previous spin, first!

Have you read this book? If you took part in the classics spin too, are you happy with your result?

18 thoughts on “Classics Spin – The Result”