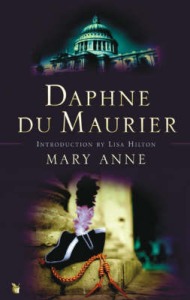 I fell in love with Daphne du Maurier’s writing as a teenager when I read Rebecca for the first time, quickly followed by Jamaica Inn, and since then, I have been (very slowly) working through the rest of her novels, short stories and non-fiction. I have thoroughly enjoyed most of her books, with only a few exceptions – and sadly this one, Mary Anne, was one of the exceptions. I wouldn’t say that I didn’t enjoy it at all – there were still a lot of things that I liked – but I didn’t think it was as strong as most of the other du Maurier novels I’ve read.

Du Maurier often draws on her own family history as an inspiration for her work; The Glass-Blowers is the story of her ancestors who lived in France during the Revolution, while The Parasites also has autobiographical elements and the houses in both Rebecca and The King’s General are based on her own home, Menabilly. Mary Anne is a fictional account of the life of Mary Anne Clarke, du Maurier’s great-great-grandmother, best known for being a mistress of Prince Frederick, Duke of York.

I loved the first few chapters of the book which follow Mary Anne throughout her childhood and teenage years. Born into a poor London family in 1776, Mary Anne Thompson grows up on Chancery Lane with her mother, younger brother and stepfather, who works as a copy editor. When her stepfather becomes ill and is unable to go to work, the thirteen-year-old Mary Anne secretly collects his copy from the printer and corrects it herself – and from this moment I knew she was going to be a great character: strong, clever and resourceful from an early age.

Mary Anne is also an ambitious person but she makes a big mistake when, in 1791, she elopes with Joseph Clarke, a stonemason. The marriage is an unhappy one; Joseph is an alcoholic who drinks and gambles away most of his money, leaving Mary Anne desperate to escape and build a new life for herself and her children. The breakdown of her marriage proves to be a turning point and it’s not long before Mary Anne comes to the attention of Frederick, Duke of York.

As the Duke’s mistress, Mary Anne enjoys the comfort and luxury that comes with her new status, but she quickly discovers that the money he provides her with is not sufficient to pay for the lifestyle she wants. Taking advantage of Frederick’s position as Commander-in-Chief of the Army, she decides to add to her income by secretly accepting payments in exchange for using her influence with the Duke to obtain army commissions. Mary Anne is sure nothing will go wrong, but to the reader it’s obvious that she is playing a dangerous game and that if her relationship with the Duke should ever come to an end, her life could begin to fall apart.

As I’ve said, I thought the first part of the book was wonderful and I enjoyed watching Mary Anne use her wits and her charm to rise from her humble beginnings to a position of power. She’s a real social-climber and reminded me of characters like Becky Sharp from Vanity Fair and Amber St Clare from Forever Amber. Remembering that du Maurier was writing about her own ancestor, I think her interest in and affection for Mary Anne come across strongly, while at the same time she is open about Mary Anne’s faults and flaws.

The second half of the novel is devoted to several court cases and scandals in which Mary Anne becomes involved, and this is where I started to get bored. The court proceedings are described in great detail, with page after page of witness statements, letters, testimonies and dialogue, which I just didn’t find very interesting to read. I can appreciate that du Maurier was trying to stay true to history here and incorporate her research into the story, but I don’t think she got the balance quite right between fact and fiction.

I’m glad I’ve had the chance to meet and get to know Mary Anne Clarke but this book left me slightly disappointed. I’m hoping for better luck with the remaining du Maurier books I still need to read (Frenchman’s Creek, Castle Dor and some of the non-fiction and short story collections).