My first taste of Margaret Kennedy’s writing came in 2014 when I read The Constant Nymph as part of a reading week hosted by Jane of Beyond Eden Rock. I enjoyed it – enough to want to read more of her work – but I had a feeling that there might have been another book that would have been a better choice. And I was right. For Jane’s second Margaret Kennedy celebration I decided to read Troy Chimneys – and it was the perfect book for me!

Troy Chimneys is set in Regency England and tells the story of one man with two very different sides to his personality. To society he is ‘Pronto’, an ambitious young politician who is always charming, obliging and eager to please. To his family and close friends he is simply Miles Lufton, quiet, serious and inclined to disapprove of Pronto and his actions. Lufton thinks of Miles and Pronto almost as two separate people and his inability to reconcile his public persona with his private one will lead to disappointment and tragedy.

The story of Miles Lufton and Pronto unfolds when one of his descendants – a gentleman living in the Victorian era – decides to amuse himself by delving into his family history. After corresponding with some Irish cousins, he receives a set of letters, journals and memoirs and begins to piece together the details of his ancestor’s life. There may have been hints in the correspondence at the beginning of the book as to the course Miles Lufton’s life would take; I’m not sure because once I started reading his own account in his own words, the framing story started to fade away and I was there, in the England of the early 19th century, experiencing events through the eyes of Miles and Pronto.

Although Lufton’s memoirs do touch on Pronto’s career in politics, the focus is mainly on Miles’ personal life: his family background; the rural community in which he grows up and the relationships between the different classes of people who live there; his time at university; the friendships he forms with the eccentric Ludovic, Lord Chalfont, and with an American farmer called William Hawker; his romantic entanglement with a young French girl and his later love for Caroline Audley. There are funny moments, but sad ones too and because Kennedy makes us care so much for Miles, we share in his emotions and feel for him when things don’t turn out as he had hoped. 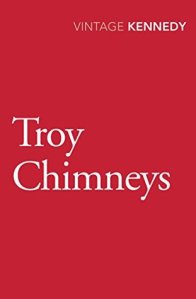 I was so impressed by the writing and by Margaret Kennedy’s grasp of the period (or periods, as there are really two) in which the story takes place. The Victorian letters felt authentic and Miles Lufton’s own narrative style felt so much like the voice of a Regency gentleman that I could easily forget I was reading a book written in the 1950s and by a woman. Kennedy never overwhelms the reader with period details, yet there is never any doubt as to the eras in which the novel is set.

I am nearly at the end of this post and still haven’t even mentioned the Troy Chimneys of the title! Troy Chimneys – the name comes from the French Trois Chemins, meaning Three Lanes – is a house in the Wiltshire countryside which Miles buys but doesn’t actually live in himself. He plans to retire there when he is older, after he has achieved all there is to achieve in politics and can say goodbye to his alter ego forever. It’s going to be a house for Miles, not for Pronto: a representation of the life he really wants to lead and the kind of person he really wants to be.

In case I haven’t made it clear enough, I loved this book! It’s nothing like The Constant Nymph and that makes me even more curious about the rest of Margaret Kennedy’s novels.