Poor Caroline, published in 1931, is the third book I’ve read by Winifred Holtby. I read both South Riding and The Land of Green Ginger in 2011 and enjoyed both (particularly the wonderful South Riding) so I don’t know why I’ve waited five years to try another of her novels! I enjoyed this one too, although the setting and subject of the book make it very different from the other two I’ve read.

The Caroline of the title is Caroline Denton-Smyth, an elderly spinster who has founded the Christian Cinema Company with the aim of reforming the British film industry. With feathers in her hat and beads around her neck, peering at the world through a pair of lorgnettes, Caroline is a figure of fun – someone to be pitied and certainly not taken too seriously. Caroline herself, however, takes the Christian Cinema Company very seriously indeed and is determined to make it a success. And so, despite having no money herself, she sets out to encourage others to invest in the company and to put together a board of directors.

This is not a novel with a lot of plot; the enjoyment is in getting to know the various people who become involved with Caroline’s business venture in one way or another. First there’s Basil St Denis, an idle, pleasure-seeking young man whose lover, Gloria, persuades him to leave his life of leisure in Monte Carlo to become chairman of the company. Then there’s Joseph Isenbaum, who hopes that joining the board will increase his standing in society and help to secure a place at Eton for his son. Hugh Macafee is an obsessive Scottish scientist who has invented the Tona Perfecta, a new film technique which he is desperate to put to use, while the American scenario writer Clifton Johnson is a greedy, unscrupulous man who, like the others, is interested only in what he can get out of the company.

Not a very pleasant collection of people so far, but there were two more whom I found slightly more likeable: Caroline’s much younger cousin, Eleanor de la Roux, newly arrived in London from South Africa with an independent fortune to invest, and Roger Mortimer, the young priest who falls in love with Eleanor and who is also the object of Caroline’s own affections – leaving her open to even more ridicule, as she is old enough to be Father Mortimer’s grandmother. 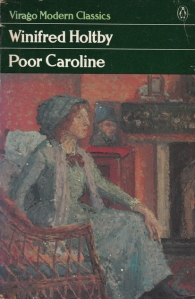 Each of the characters I’ve mentioned is given a chapter of his or her own, so that we have the chance to see things from several different points of view and add to what we know of Caroline, of the other characters and of the Christian Cinema Company. Although the opinions of Caroline differ from character to character – some view her with scorn, some with pity and some with frustration – each chapter ends with the same words: poor Caroline!

Caroline is an unusual heroine; being almost seventy-two at the time of our story, she devotes herself to her cause with an impressive amount of energy and enthusiasm, yet this devotion makes her unrealistic about what she is likely to actually achieve and blind to the things which are more important in life. She is not always a nice person and, as her family like to point out, she has spent a lifetime borrowing money from people knowing that she will never be able to give it back. Despite all this, I had a lot of sympathy for Caroline and couldn’t help admiring her as well as feeling sorry for her. Even though it seemed obvious that the Christian Cinema Company was doomed to failure, for poor Caroline’s sake I wanted it to succeed.

Reading Poor Caroline has reminded me of how much I like Winifred Holtby’s writing. I’m glad I still have a few more of her novels to look forward to – if you’ve read any of them please let me know what you thought!