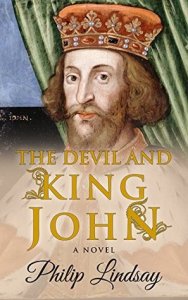 King John, who reigned from 1199 to 1216, has the unenviable reputation of being one of England’s ‘worst’ kings. Although historians are constantly revising their opinion and adding to what we know of John, people still tend to have a negative impression of him. His portrayal as the villain of Robin Hood must be at least partly responsible for that! This 1943 novel by the Australian author Philip Lindsay attempts to give a more balanced view of John, based around the idea that many of his actions were the result of an uncontrollable temper rather than simply cruelty.

The novel begins with John’s early years when he is known as Lackland because his father, Henry II, has divided his lands between his three eldest sons, leaving no substantial territories for John to inherit (despite John being his favourite son). On Henry’s death, John’s brother, Richard, takes the throne but spends much of his reign overseas fighting in the crusades and neglects the very important task of producing an heir. When Richard dies in 1199, John becomes king…but his own reign will be a very troubled one.

The Devil and King John is a straightforward fictional biography, taking us through the key moments of John’s life and career: his military defeats in northern France and subsequent attempts to win back lost lands; his dispute with Pope Innocent III and his excommunication; the death of his nephew, Arthur of Brittany, widely believed to have been murdered by John; and the rebellion by his barons which led to the signing of the Magna Carta at Runnymede in 1215. Lindsay’s portrayal of John throughout all of this is generally quite sympathetic, but not excessively so and I certainly can’t say that I came away from the book liking the character!

In the opening chapter of the novel we are told that the Angevins (the royal house to which John belongs) were descended from a witch and that “from the devil they had sprung and to the devil they would go”. After this, there are references to the devil on almost every page (at least, it seemed that way). I can understand that the author wanted to keep the theme going throughout the story, but constantly being told that “the devil is in John” or “John rides with the devil” is too much!

When I wrote about the other Lindsay novel I read earlier this year – Here Comes the King, the story of Catherine Howard and Thomas Culpeper – I complained that there was too much focus on the romance and I said I thought I’d enjoy one of his other books more. I did prefer this one and thought there was a good balance of romance, battles and politics. However, I was disappointed with the way in which the female characters were depicted in this book, particularly John’s second wife, Isabella of Angoulême, who had the potential to have been a great character. I also felt slightly uncomfortable reading about the relationship between John, in his thirties, and Isabella, aged thirteen, even though I know that an age difference of this size wasn’t unusual by the standards of medieval nobility.

John’s first wife, Hadwisa (also known as Isabella of Gloucester), is portrayed as a witch who encourages John to follow the ‘Old Religion’. Lindsay states in his author’s note that there is no historical evidence for this, but he wanted to find a way to connect John with witchcraft and to explain the king’s lifetime of conflict with the church over issues such as his reluctance to take communion.

Although there were some aspects of this book that I didn’t like very much, overall I thought The Devil and King John was an interesting read. If you’ve read any of Philip Lindsay’s novels – or any good books about King John – I’d love to hear about them!

13 thoughts on “The Devil and King John by Philip Lindsay”