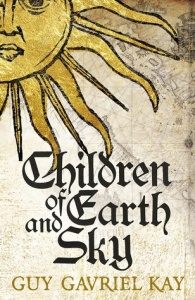 I love Guy Gavriel Kay’s books, so I really don’t know why it is that I’ve read so few of them! I’ve had Under Heaven waiting on my Kindle since finishing The Last Light of the Sun more than a year ago, but for some reason there always seems to be something else that needs to be read first. When I noticed his latest novel, Children of Earth and Sky, in the library I decided to forget Under Heaven for now and read this one first, while I was in the mood for it.

Guy Gavriel Kay’s books are a wonderful and unique blend of fantasy and historical fiction. Children of Earth and Sky is set in the same world as several of his other novels, including The Lions of Al-Rassan – a world with two moons, one blue and one white, in which the three main religious groups are the sun-worshipping Jaddites, the Asharites who pray to the stars and the Kindath who worship the moons (corresponding to Christians, Muslims and Jews respectively). The action in this book takes place mainly in thinly disguised versions of Venice, Dubrovnik and Constantinople – which Kay renames Seressa, Dubrava and Asharias – in what is clearly supposed to be the Renaissance period.

The plot is quite a complex one, with multiple storylines which meet and intersect from time to time, so rather than attempting to describe it in any detail, I’m just going to mention a few of the characters we meet.

First, there’s Pero Villani, a young artist from Seressa, who has been sent on a mission to the Osmanli (Ottoman) court at Asharias with a commission to paint a portrait of the Grand Khalif, Gurçu the Destroyer. However, Seressa’s Council of Twelve have another task in mind for Pero to carry out at Asharias, one which could put his life in danger. The Council are also keen to place a spy in the rival republic of Dubrava and enlist the services of Leonora Valeri, a woman with a troubled past who welcomes the chance to escape from Seressa.

The ship on which Pero and Leonora embark on the first stage of their journey is owned by the family of Marin Djivo. As the younger son of a Dubrava merchant, Marin has a lot of experience of the world of trade and shipping, but this particular voyage is about to change his life. Sailing from Seressa to Dubrava, his ship is boarded by pirates from the walled town of Senjan, and among them is the archer Danica Gradek, a young woman who is desperate to prove herself as a warrior and avenge her family against the Osmanli. Finally, there’s Damaz, who was captured as a child and trained to fight in the Osmanli army.

The lives of these five characters become closely entwined as their paths cross, then part, then cross again, and the actions of one may have consequences – sometimes unintentional – which affect the lives of one or all of the others. Now that I’ve read several of Kay’s novels, I can see that this seems to be a recurring theme in his work.

I have been to both Venice and Dubrovnik – and would highly recommend visiting them if you haven’t already – and even though Kay’s versions have different names, the descriptions of both locations are still clearly recognisable. If you have a good knowledge of the history of Renaissance Europe, you should be able to draw historical parallels, as well as geographical, between this fantasy world and the real one – but remember that it is a fantasy world (even though the magical elements are small and understated), which gives Kay the freedom to take the story in any way he wishes without sticking rigidly to historical fact.

I found a lot to love about this book; my only disappointments were the ending and the lack of emotional engagement I felt with the characters. When I think of the thought-provoking epilogue that ended Tigana, or the dramatic conclusion of The Lions of Al-Rassan, that’s what was missing from Children of Earth and Sky. The novel’s various storylines were wrapped up too neatly and too completely at the end of the book and didn’t make much of an emotional impact on me, which was a shame after spending so long getting to know this set of characters.

This is not one of my favourite Kay novels so far, but I did enjoy it and am looking forward to reading the rest of his work, probably beginning with Under Heaven!