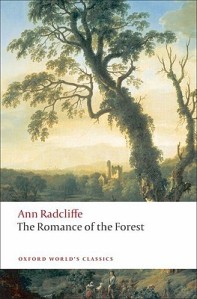 If you were going to write a Gothic novel, what sort of things would you include? Dark forests? Ruined abbeys? Stormy weather? Wicked noblemen? Secret manuscripts? Skeletons? Well, you’ll find all of those and more in Ann Radcliffe’s 1791 classic, The Romance of the Forest. Radcliffe was one of the earliest pioneers of the Gothic novel and, while I can see that her books won’t appeal to everyone, I’ve now read four of them and enjoyed them all – although this one is not her best.

The story is set in 17th century France and opens with Pierre de la Motte, who has found himself in debt, fleeing Paris with his wife and servants, hoping to get as far away from his creditors as possible. Losing their way in the dark, they see lights shining from a house in the distance and Pierre knocks on the door to ask for help. He gets more than he bargained for, however, when the man who answers the door pushes a beautiful young lady towards him and begs Pierre to take her away with him. Pierre agrees and the family, with the addition of the girl, whose name is Adeline, continue on their way.

They find refuge in an old, deserted abbey and decide to settle there for a while, safe in the knowledge that their pursuers are unlikely to find them in such a remote and gloomy place. Inside the abbey, though, there are new terrors to face. The discovery of a skeleton, a rusty dagger and a faded manuscript point to a murder in the abbey’s history – and when the sinister Marquis de Montalt arrives on the scene, Adeline senses that her own life could also be in danger.

Ann Radcliffe is not known for her strong heroines and Adeline is no exception, so be prepared for some fainting and swooning and lots of melodrama. Having said that, she does have strong principles, and tries, in her own way, to fight for what she wants and believes in. Like Emily St Aubert in The Mysteries of Udolpho, she also has a habit of picking up her lute and breaking into song from time to time (giving Radcliffe an opportunity to insert her own poems into the text).

I didn’t find this book quite as atmospheric as her others (certain sections of The Italian, in particular, have a darkness and an eeriness that are never matched in this book), but her descriptive writing is still beautiful:

Dark woods, intermingled with bold projections of rock, sometimes barren, and sometimes covered with the purple bloom of wild flowers, impended over the lake, and were seen in the clear mirror of its waters. The wild and alpine heights which rose above were either crowned with perpetual snows, or exhibited tremendous crags and masses of solid rock, whose appearance was continually changing as the rays of light were variously reflected on their surface, and whose summits were often wrapt in impenetrable mists.

I also enjoyed seeing the plot unfold in the final third of the novel, with revelation following upon revelation. There are some coincidences which are too convenient or too ridiculous to be believed and any big holes in the plot are explained away as ‘fate’ or ‘destiny’. These are things that would bother me in any other type of novel, but in an 18th century Gothic novel, they’re exactly what I would expect and so I was able to suspend my disbelief without any problems!

This is a weaker Radcliffe novel, in my opinion, so if you’ve never read any of her books before I would probably recommend beginning with a different one. The Italian, The Mysteries of Udolpho and A Sicilian Romance are the others I’ve read and any of those might be a better starting point.

7 thoughts on “The Romance of the Forest by Ann Radcliffe”