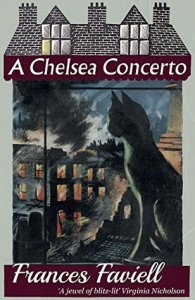 I had a nice surprise a few months ago when I unexpectedly received two ebooks from Dean Street Press who were launching their new imprint, Furrowed Middlebrow (in conjunction with Scott from the Furrowed Middlebrow blog). The first one I chose to read was A Chelsea Concerto, a Second World War memoir originally published in 1959.

Frances Faviell lived at 33 Cheyne Place in Chelsea – one of the most heavily bombed areas of London during the war due to its location, close to the Royal Hospital and to several bridges over the River Thames. Her memoir opens in the early days of the war, a period known as the Phoney War because it seemed as though very little was actually happening. During this time, as well as continuing her work as an artist, Frances becomes a Red Cross volunteer, taking part in air-raid drills and trying to ensure that the people of Chelsea are as fully prepared as they can possibly be for whatever may follow.

What follows, of course, is the Blitz, which Faviell describes in vivid detail. Night after night, people living in Chelsea are subjected to one bombing raid after another, emerging from the shelters each morning in fear of what they might find: their home destroyed; a friend or neighbour dead; the roads blocked; an unexploded bomb in the street. With her work as a volunteer, Frances is often at the centre of the action, experiencing and witnessing the most horrifying things, while throughout it all, the Green Cat – her most treasured possession – sits in her window as a symbol of safety and prosperity.

Serene and aloof he sat in the window in the sunlight, surveying with contempt the activities in the street. Everyone begged me to put him down in the cellar with some of the paintings which I had stored there now. But I would not move him. Was he not the Guardian of the Home? He must be treated with respect.

Before the war, Frances had travelled widely and learned to speak several languages, something which enables her to offer help and support to the refugees who have fled to Britain as the Nazis sweep across Europe. There are some real characters amongst the refugees – in particular ‘The Giant’, a large and outspoken Belgian fisherman – and some funny moments, such as the story of Monsieur D, who is suspected of being a spy when mysterious lights show from his window during a blackout. Many of these people, though, are frightened and traumatised and look to Frances for advice and protection. She becomes particularly close to Ruth, a Jewish refugee from Germany, who attempts to kill herself, leaving her young daughter in need of Frances’ care. Nineteen-year-old Catherine, who arrives in London pregnant and unmarried, is another troubled young woman whom Frances finds herself taking under her wing.

Despite the terrible things going on around her – and the terrible things she experiences herself – Frances keeps her sense of humour and often manages to see the funny side (when she remembers a government information leaflet on what to do if German parachutists land, for example, or when she talks about her dachshund, Vicki, known as Miss Hitler).

The wording of the pamphlet which we knew was designed to try and avoid the same panic flight as in Belgium and France caused such hilarity everywhere that every current show included some skit on the arrival of parachutists. In the FAP we went about chivvying one another with the words of the clauses about seeing anything suspicious and “Be calm, be quick, be exact” became a joke in every place of work or exercise which we had to carry out with the Civil Defence.

Most of her memories are quite harrowing, though, such as when she describes the horrors of trying to reassemble pieces of bodies blown apart by bombs and the time she was lowered headfirst into a hole in a collapsed building to assist an injured man. But the most vivid and dramatic episode of all comes near the end when Faviell’s own home is bombed – and although we know that Frances must have survived to be able to write this book, the tension and the sense of danger come across so strongly in her writing that we worry for her anyway.

I haven’t read many wartime memoirs and I couldn’t help comparing this one to the few that I have read. It didn’t have quite the emotional impact that Vera Brittain’s Testament of Youth had on me, for example, but I still found it a fascinating and moving read. Frances Faviell wrote several other books which are also available from Dean Street Press; has anyone read any of them, and if so, which would you recommend?

6 thoughts on “A Chelsea Concerto by Frances Faviell”