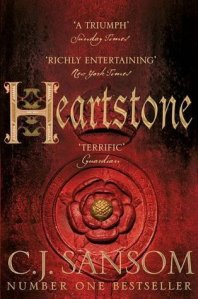 As part of my Reading the Walter Scott Prize project, I knew that I would, at some point, need to read CJ Sansom’s Heartstone, which was shortlisted for the prize in 2011. Knowing that it was the fifth book in a series, though, and not having read any of the previous ones, I decided to start at the beginning with Dissolution and take my time working through them all. This was a good decision as I have thoroughly enjoyed the whole series – and now that I’ve finally read Heartstone, I won’t be stopping here but will be going on to read the sixth book, Lamentation, as well.

Like the earlier novels, this one is set in Tudor England and narrated by the hunchbacked lawyer Matthew Shardlake. It’s 1545 and with news of a huge French fleet about to cross the Channel, England is preparing for invasion. On Henry VIII’s orders, an army is being raised and warships including the Great Harry and the Mary Rose are getting ready for action in the harbour of Portsmouth. Meanwhile, Shardlake is also heading for the south coast on his latest mission for Catherine Parr, the Queen.

It has been claimed that “monstrous wrongs” have been committed against a young ward of court, Hugh Curteys, by his guardian Sir Nicholas Hobbey, and the Queen wants Shardlake to investigate. Accompanied, as always, by his assistant and clerk Jack Barak, Shardlake sets off on the journey from London to Hampshire, falling in with a company of soldiers on the way. On arriving at the Hobbey estate, it is obvious that there is something not quite right – but with Hugh insisting that he is not badly treated, how will Shardlake ever find out what is going on?

As if this wasn’t enough, Shardlake also has a second mystery to look into. In the previous novel, Revelation, he met Ellen Fettiplace, a woman who has been confined to the Bedlam for many years. With his work for the Queen taking him close to the village where Ellen grew up, he decides to do some investigating of his own in the hope of finding out what happened to her all those years ago and how she ended up in the asylum.

Poor Matthew; things just don’t run smoothly for him in this book and he is forced to acknowledge that he has been too “full of righteousness” – not a bad thing for a lawyer to be, you might think, but it does seem that he spends a lot of time trying to help people who really don’t want to be helped. Like Barak (who is desperate to get home in time to see the birth of his child), I found him quite frustrating with his refusal to leave things alone and take note of the warnings he is given, but of course that is what makes him feel so real and so human.

As I said, I’ve enjoyed all of the books in this series and this one is no exception. It isn’t my favourite, though, mainly because I felt that it was much longer than it really needed to be and that there was too much padding while Shardlake and Barak moved backwards and forwards between one location and another without anything happening to advance the plot. It didn’t help that I guessed the solution to one of the mysteries early in the book (probably because I have read a few other books recently with similar twists, and not because it was made particularly easy to guess) and had to wait a very long time for Shardlake to work it out for himself!

One thing I always love about the Shardlake novels is Sansom’s wonderful, vivid depiction of life in Tudor England. In this book, we are dropped right into a country making preparations for war (an unpopular and expensive war), and we learn a lot about the weapons and armour that are used, how men are recruited into the army and the training they undergo, as well as being treated to a long, dramatic description of the sinking of the Mary Rose at the Battle of the Solent. At the end of the novel, Sansom provides a detailed historical note in which he gives more information on the background to the story and separates fact from fiction.

Although I didn’t love Heartstone as much as some of the other books in the series, it was still a great read and I’m looking forward to joining Matthew Shardlake again soon in Lamentation.

This is book #5 for the R.I.P XII challenge.

15 thoughts on “Heartstone by CJ Sansom”