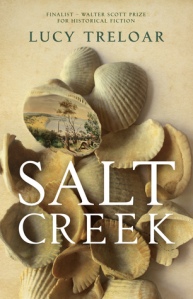 As well as taking part in German Literature Month this November, I also wanted to read something for Brona’s Australia Reading Month. I haven’t read many Australian books or authors and this is something I want to change, as discussed in a recent Historical Musings post. Lucy Treloar’s Salt Creek was one of the books I needed to read for my Walter Scott Prize project so seemed like the perfect choice.

Salt Creek is set in the 19th century and narrated by Hester Finch, who is fifteen years old as the novel opens in 1855. Having been leading a comfortable lifestyle in Adelaide, the family have fallen on hard times and Hester’s father has decided that they should move to the Coorong region of South Australia where they can try to build a new life for themselves farming the land. Arriving at Salt Creek in the Coorong, however, they find that things are not going to be easy. The landscape is beautiful but desolate, the land is difficult to tame and their Aboriginal neighbours view the newcomers with suspicion.

Hester’s mother, who has been depressed for some time, struggles to adapt and Hester, as the eldest daughter, finds herself taking on more responsibilities around the house. When the chance of freedom comes her way, will she take it or are the ties binding her to Salt Creek too strong? Meanwhile, the efforts of her father and brothers to work the land and make it suitable for farming bring them into conflict with the indigenous Ngarrindjeri people who have made the Coorong their home for generations.

Acting as a bridge between the two cultures is Tull, a boy from a local tribe who is welcomed into the Finch family and grows up with Hester and her brothers and sisters.

That winter I began to notice how differently he saw almost everything compared to us. Mama might say that the colours of winter reminded her of the highlands of Scotland, and I might say that the sky was sapphire or that the washing lines were like cobwebs on a cold morning. Hearing these things perplexed him, as did so much else – the encumbrances of our clothing, our impractical hair, our heavy boots, the fences that we built – which he made apparent by his stillness or his incredulity…

Tull’s relationship with the Finches is one of the most interesting aspects of the story. They come from such different worlds, yet find shared ground and common interests, giving hope that the wider groups they represent – the Aboriginal people and the white settlers – may be able to cooperate and work together. However, it is through Tull that Hester becomes aware of the harm the arrival of her family is doing to the Ngarrindjeri and to the environment.

The story itself has a bleakness to match the harshness of the landscape. Most of the characters experience little or no happiness, enduring poverty, the death and loss of loved ones, prejudice, betrayal and the breakdown of trust. It’s such a sad and tragic story – and yet I didn’t feel quite the emotional connection to Hester that I would have liked. I’m not sure why that should be, but I didn’t become fully invested in Hester’s personal story until I was well into the second half of the book. I don’t think it helped that the author chose to write part of the novel from the perspective of an older Hester living in England and looking back on her life. A more linear timeline might have worked better for me.

Still, Salt Creek is a beautifully written novel, with some lovely, vivid descriptions of the Coorong. Here is Hester having her first glimpse of her new home:

There was little enough to see – dry grasses and low shrubs in sweeps down to the lagoon, an arm of contorted trees hugging the slope from the low ridge and modest folds of land – a bed risen from like my own and its covers pushed back to hold the warmth of night. The colours were not intrinsic. A dry grass stem in shadow could be as drab as sightless eyes or gold in sunlight or silver in moonlight, but I did not know that then.

This was a good choice for the Reading Month; I loved the blend of fact and fiction (Lucy Treloar explains this in her author’s note) and the insights it gave me into life in South Australia, a place I knew very little about until now. I’m sure I’ll be picking up more Australian fiction soon!