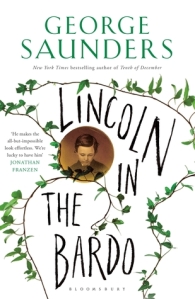 It’s February 1862 and an eleven-year-old boy is dying, probably of typhoid fever. After his death, he is interred in a crypt at Oak Hill Cemetery in Georgetown. Unable to accept that he has lost his beloved son, the boy’s father enters the crypt on several occasions to hold the body and grieve. The boy’s name is Willie Lincoln and his father is Abraham, the sixteenth President of the United States.

According to author George Saunders this is a true story, reported in contemporary news accounts at the time, and is what inspired him to write Lincoln in the Bardo, a novel which won the 2017 Man Booker Prize. I don’t always get on well with Booker novels and I wasn’t at all sure whether it was a good idea for me to read this book, but it sounded so unusual and intriguing that when I saw it in the library I couldn’t resist.

The first thing to consider is the meaning of that word in the title – ‘bardo’. In Tibetan Buddhism, bardo is the transitional state between death and rebirth. It is portrayed in Saunders’ novel as a sort of limbo inhabited by the ghosts of people who either aren’t aware that they are dead or won’t admit to it, and for one reason or another have not yet moved on. This is where Willie Lincoln finds himself following his death and is unable to leave because his father is not ready to let go. The other spirits are worried about Willie – they know the bardo is no place for a child to linger – but they also have stories of their own, which slowly begin to unfold as the novel progresses.

The next thing – a very important thing – that I need to mention is the writing style, because Lincoln in the Bardo is not written in conventional prose. Instead, it takes the form of a cacophony of voices, all speaking up, giving their opinions, interrupting each other and completing each other’s sentences. It looks a bit daunting on the page, with short fragments of dialogue accompanied by the speaker’s name, but approaching it as if I were reading a play made it feel easier to follow. I don’t usually listen to audiobooks, but I think this particular novel would be a good one to listen to. Apparently the audio version has 166 narrators!

As well as the conversations taking place in the bardo, there are also some chapters made up of quotations from a selection of primary and secondary sources including letters, memoirs and academic accounts. These provide us with some background information on Abraham Lincoln and the period before and after Willie’s death. The sources looked authentic, but I later discovered that although some of them are real, others are fictional – and there is no easy way to tell which ones are which. This bothered me slightly, but probably won’t bother everyone! What I did like was the way Saunders uses these quotations to illustrate the unreliability of sources and the importance of looking at more than one account of the same event. For example, a chapter describing Lincoln’s appearance gives one source saying that his eyes are “gray-brown”, followed by another stating that they are “bluish-brown” and another simply “blue”.

I would say this was a love it or hate it type of book – except that for me it was a bit of both! There is no doubt that it’s wonderfully creative, imaginative and original, with a lot to admire and enjoy, but my initial feeling that this wasn’t really a book for me proved to be correct. I have never been much of a fan of experimental styles and structures; I find that I get distracted from the story and am unable to become fully absorbed in the way that I prefer. Maybe for that reason, I didn’t find the book as emotional as I would have expected given the subject – although other readers have described it as moving and heartbreaking, so it’s probably just me. I’m glad I read it though, as I would have been curious about it forever otherwise! If you’ve read it too, I would love to hear what you thought.

14 thoughts on “Lincoln in the Bardo by George Saunders”