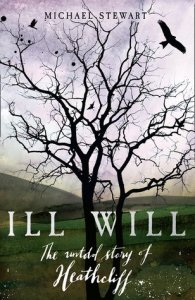 Have you read Wuthering Heights? If so, you’ll remember that in the middle of the book, Heathcliff disappears after hearing Cathy say that it would degrade her to marry him. When he returns after a three year absence he has undergone a transformation, but we never find out where he has been and what he has done during that period. In Ill Will, Michael Stewart has created a story for Heathcliff to fill in the gaps.

In Stewart’s version of events, Heathcliff leaves Wuthering Heights with two main goals in mind: first, to find a way to get revenge on Hindley and Edgar Linton, and second, to discover as much as he can about his own background. Knowing that old Mr Earnshaw, Hindley and Cathy’s father, brought him back to Wuthering Heights as a child after a trip to Liverpool, Heathcliff (taking the name William Lee) sets off for the west coast hoping that Liverpool will hold clues to the truth of his parentage. On the way, he rescues a ten-year-old girl, Emily, from a brutal whipping and as she is all alone in the world he allows her to join him on his mission.

As the daughter of a highwayman who has recently met his fate at the end of a hangman’s noose, Emily is used to living by her wits and she suggests that they make use of her unusual talents to earn some money for the journey. If her scheme goes wrong, however, they could find themselves in serious trouble. Will they make it safely to Liverpool – and if they do, what will they find there? Will the secrets of Heathcliff’s past be revealed and will he be able to return to Wuthering Heights as a rich and educated gentleman?

As Wuthering Heights is one of my favourite classics, I was immediately drawn to this book when I saw it on NetGalley, but at the same time I didn’t want to set my expectations too high as I have often been disappointed with sequels, prequels and retellings of classic novels in the past. This had the potential to be a good one – Heathcliff may not be the most pleasant of characters but he is certainly an interesting one and there are an endless number of stories which could be invented to fill in his missing years – but as I suspected, there were things that I disliked as well as things that I liked.

Starting with the positives, there’s some lovely descriptive writing which brings to life the countryside Heathcliff and Emily pass through on their way to Liverpool. These descriptions could only have been written by someone who had visited the area and felt a connection with it, so I was not surprised to read that Michael Stewart had spent some time walking across the moors as part of his research. The novel is set in the 1780s (although Wuthering Heights was published in the nineteenth century, most of the action takes place earlier than that), which is a time of change as the industrial revolution begins to transform the landscape and the lives of the people who inhabit it. The north of England is at the heart of this, and Heathcliff, who has been isolated at Wuthering Heights for years, takes note of the canals, bridges, factories and other signs of technological progress that they see on their journey.

A fascinating setting and time period, then; my main problem with the book was the language. I don’t mind some swearing in a book, if it feels like the natural way that a character would speak, but I didn’t really expect to pick up a novel based on Wuthering Heights and find the f-word and c-word on almost every page, especially coming from a ten-year-old girl (although to be fair, I suppose she is described as ‘foul-mouthed’ in the blurb). I found it irritating and a constant reminder that I was reading a contemporary take on Wuthering Heights, rather than being swept back into the world Emily Brontë had created, which is what I would personally have preferred. It won’t bother everyone, I’m sure, and I know that people did obviously swear in the eighteenth century, but it just didn’t feel right to me in this particular book.

The actual story is quite engaging, which is why I kept reading – and although the explanation of Heathcliff’s origins is predictable, it’s realistic given the time and place and the few clues we have to work with from Brontë’s novel, but despite my love of Wuthering Heights or maybe because of it, this book just wasn’t for me. Stewart’s portrayal of Heathcliff was too different from the way I have always imagined him, so I never felt convinced that I was reading about the same character. I’m sure Ill Will is going to be a big success with other readers, though, and as there’s already talk of a television adaptation I think we could all be hearing a lot more about it in the future.

Thanks to HQ for providing a copy of this book for review via NetGalley.

21 thoughts on “Ill Will by Michael Stewart”