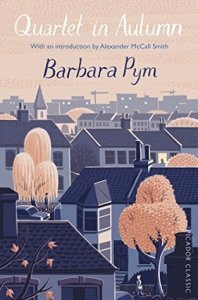 This is my second choice for this week’s 1977 Club (hosted by Simon and Karen) and the third book I’ve read by Barbara Pym. Having so far read only Excellent Women and Less Than Angels, I was surprised by how different Quartet in Autumn is. It’s a much darker, sadder, more poignant novel and, although I did like it, I found it a little bit depressing.

The ‘quartet’ are two women and two men – Letty, Marcia, Edwin and Norman – who work together in the same office in 1970s London. They are four very different people with different personalities, but they have two things in common: they are all in their sixties and they all live alone. Although Pym never specifies exactly what their jobs involve, it is implied that the four of them have been sharing an office for several years and have an understanding of each other’s personal circumstances and living arrangements. Despite this, and despite their loneliness, they never do anything together outside of working hours – they eat lunch separately and then go their separate ways again at the end of the day.

We learn very little about Norman, except that people consider him an ‘odd little man’ and that his social life consists solely of dentist appointments and occasional visits to see his brother-in-law, whom he dislikes. Edwin, a widower, is sometimes invited to stay with his married daughter and grandchildren, but otherwise tries to keep himself busy by taking part in as many church activities as possible. The two men seem to play slightly smaller roles in the novel, at least until halfway through when the women retire (not to be replaced) and the quartet is reduced to a duo.

Letty has always planned to move to the countryside with her friend Marjorie after her retirement, but when the unthinkable happens and Marjorie gets engaged, she is left facing a future in an old people’s home instead. But it’s Marcia who is the most tragic character – Marcia who has had surgery for breast cancer and looks forward to her trips to the hospital as ‘holiday treats’, who has developed an obsession with hoarding empty milk bottles in the garden and who attracts the unwelcome attention of a concerned social worker.

A book about four lonely people doing meaningless, unappreciated jobs and looking for ways to fill boring, empty lives does not make the most uplifting of reads, but Pym still manages to sprinkle some humour into the story and to leave us with the sense that there is some hope for our characters after all. Letty, at least, seems to want things to change and to be willing to take the first steps towards bringing about those changes. 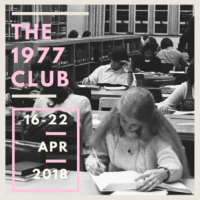 Despite the sad, melancholic feel of the book, I think it is my favourite so far by Barbara Pym. Her observations are both witty and sensitive and I found myself really caring about Letty, Norman, Marcia and Edwin. Another good choice for 1977 Club and now I’m looking forward to reading Jane and Prudence, the other Pym novel I have on my shelf.