After reading Lawrence Ellsworth’s new translation of the Alexandre Dumas novel The Red Sphinx last year, I discovered that Ellsworth was also the editor of the enticingly titled The Big Book of Swashbuckling Adventure. As a fan of the swashbuckling genre, I knew I would have to read it. 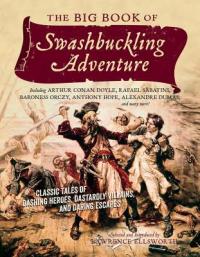 This is certainly a big book, containing eighteen stories and poems written in the 19th or early 20th centuries. Some of them are by well-known classic authors such as Dumas, Arthur Conan Doyle and Baroness Orczy, but some of the others are more obscure – authors who may have enjoyed some success at the time, but have been largely forgotten today. Ellsworth provides a brief introduction to each author’s work, including a short biography and some background information on the story which follows and why he selected it for this collection. All different types of swashbuckling hero are represented: the pirate, the musketeer, the jester, the swordsman, the aristocrat and more.

I’m not going to discuss all of the stories in depth here – there are too many of them – but I will highlight a few favourites and just give the others a quick mention.

One that I particularly enjoyed was Crillon’s Stake by Stanley J Weyman, an author I’ve heard about but have never actually read until now. Set in France in 1587, two men sit down to play a game of dice in which the stakes become higher and higher until they are literally gambling with their lives. The outcome of the game will have surprising consequences, however, as the participants become entangled in a conspiracy against the king.

Another favourite was The Black Death by Marion Polk Angellotti, one of only a few female authors to be featured in the book. This story is part of a series that she wrote about the adventures of the 14th century mercenary captain Sir John Hawkwood. On a journey through the mountains of Italy, Hawkwood tries to protect his men from attack by enemy soldiers, but with the Black Death raging across the country, he could be leading them into a different type of danger instead.

I also enjoyed Pirate’s Gold by H. Bedford-Jones, which was first published in an American ‘pulp magazine’ in the 1920s. George Roberts accepts a position as first mate on a ship sailing to Virginia, The King Sagamore, which is captained by the charismatic Captain Low. It is only when the ship has left port and is out at sea that Roberts discovers his captain is actually the notorious pirate better known as Bloody Ned. This is a much longer story than most of the others in the book – more of a novella, really, which allows more development of storyline and characters – and although I doubt I’ll look for anything else by Bedford-Jones, this was fun to read.

The Sin of the Bishop of Modenstein by Anthony Hope is another fun read, set in the kingdom of Ruritania, the same world as his famous novel The Prisoner of Zenda. In this story, King Rudolf of Zenda gambles away his castle and estate, but when the new owner, Count Nikolas of Festenburg, moves in, he discovers that Rudolf’s sister, Princess Osra, is still there…

I was surprised to find that I had already read some of the pieces in the book. The Cabaret de la Liberté by Baroness Orczy is taken from her collection The League of the Scarlet Pimpernel, which I read a few years ago. I couldn’t really remember this particular Pimpernel story, so I was happy to read it again. I did not re-read White Plume on the Mountain by Alexandre Dumas, which is not actually a standalone story, but a reproduction of several chapters from the end of The Red Sphinx.

For the same reason I didn’t bother with Captain Blood’s Dilemma by Rafael Sabatini, and I only briefly looked at The Fight for Black Bartlemy’s Treasure by Jeffery Farnol, which are also the concluding chapters of full-length novels (Captain Blood and Black Bartlemy’s Treasure respectively). It just seemed an odd decision to include these in a collection of ‘short stories’ and will surely spoil the actual novels for anyone who hasn’t read them. On the other hand, Ellsworth does include the opening chapters of Johnston McCulley’s first Zorro novel, turning them into a story titled Señor Zorro Pays a Visit. This seems a much more sensible way to introduce a new reader to an author’s work!

There’s also a second story by Sabatini (Sword and Mitre, a true standalone this time), and one each by Sidney Levett-Yeats, John Bloundelle-Burton and Harold Lamb. I hadn’t come across any of the last three authors and I found their stories entertaining but forgettable (although Lamb’s is slightly different, being set in India). Finally, there’s a story by Arthur Conan Doyle which features his hero Brigadier Gerard, and a Robin Hood adventure by Pierce Egan. The collection is completed by several short poems, Cheerly O and Cheerly O by Jeffery Farnol, The Buccaneer’s Last Shot by Farnham Bishop and The Pirate Sea by Lilian Nicholson. These are interspersed amongst the stories and add a bit of extra variety.

As is usually the case with anthologies of this kind, the stories and the writing are of mixed quality and I found it quite uneven, especially towards the end. With such a variety of different types of story, though, I think there should be something for almost everyone here.

11 thoughts on “The Big Book of Swashbuckling Adventure, edited by Lawrence Ellsworth”