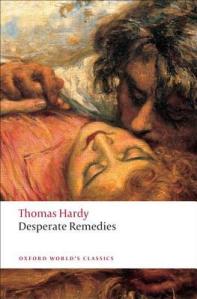 Desperate Remedies (1871) was Thomas Hardy’s first published novel, following an earlier manuscript which failed to find a publisher and was later destroyed. I love Thomas Hardy’s books and have been looking forward to reading this one as it has been described as a sensation novel, a genre of Victorian fiction that I’ve enjoyed since I first discovered authors like Wilkie Collins, Mary Elizabeth Braddon and Ellen Wood, in the years before I started my blog.

At the beginning of the novel, we learn that our heroine, Cytherea Graye, was named after her father’s one true love, a woman who disappeared without explanation and left him heartbroken. Mr Graye later married and had two children – Cytherea and her brother Owen – whom he raised alone after his wife’s death. When Mr Graye himself dies, having made some poor business decisions in the final years of his life, Cytherea and Owen are faced with making their own way in the world. Owen decides to pursue a career as an architect, while his sister advertises for work as a governess.

Finding it harder to get a job than she had expected, Cytherea eventually accepts a position as lady’s maid to Miss Aldclyffe, a middle-aged unmarried woman who seems to be hiding a number of secrets. Why does she have so much affection for Cytherea, whom she has never met until now? Why does she go to such great lengths to employ the mysterious Aeneas Manston as steward on her estate – and why is she so keen to encourage Cytherea to marry him? Manston is another person with secrets and Cytherea is reluctant to marry someone she feels she can’t fully trust, especially as she has already fallen in love with Edward Springrove, her brother’s friend. Unfortunately, Edward is engaged to another woman – and when Cytherea’s financial situation becomes increasingly desperate, she finds herself drawn into Aeneas Manston’s schemes.

I loved Desperate Remedies! It starts off slowly, introducing Cytherea and her family background and explaining the circumstances that lead to her arrival at Miss Aldclyffe’s house, but it quickly develops into an intriguing and entertaining page-turner with plenty of twists and surprises. I liked Cytherea; there are stronger, more interesting heroines in some of Hardy’s later novels, but Cytherea is by no means a weak and helpless woman and I enjoyed following her story.

I did find two of the novel’s big secrets quite easy to guess, but there were still times when I wasn’t sure where the story was going and when the actions of one character or another left me mystified. The plot makes it feel quite similar to a Wilkie Collins novel, but there are still some elements which make it recognisable as a book written by Thomas Hardy, such as the descriptions of the landscape and the portrayal of a small rural community. This isn’t one of my absolute favourite Hardy novels – I think some of his later ones are better – but it’s still a great read.

The remaining novels I have left to read by Hardy are all books that I know nothing about: The Well-Beloved, Two on a Tower, A Laodicean, The Hand of Ethelberta and The Trumpet-Major. Does anyone have any recommendations from those five? I also haven’t read any of his short story collections, Wessex Tales, Life’s Little Ironies and A Group of Noble Dames, so I still have lots of Hardy to look forward to.