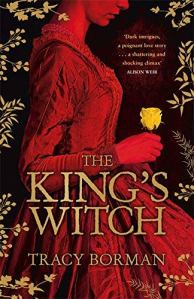 This is the first novel by historian Tracy Borman, although she has previously written several non-fiction books, none of which I have read. The King’s Witch is set in England in the early 17th century, during the reign of James I (who was also James VI of Scotland), and from the title I was expecting something similar to The Witchfinder’s Sister or Widdershins – a story of witch trials and burnings, and of innocent women persecuted because of a gift for healing. Well, The King’s Witch does cover those topics, but there is much more to the book than that and I wasn’t surprised to learn that this is the first in a trilogy and another two novels will be needed to finish the storylines begun in this one.

Our heroine – the ‘witch’ of the title – is Frances Gorges, a young noblewoman whom we first meet in 1603 at the bedside of Elizabeth I, helping her mother to nurse the dying queen through her final days. Frances knows how to use herbs to treat illness and provide comfort, but when Elizabeth is succeeded by James, her skills are no longer appreciated. The new king is determined to stamp out witchcraft in his kingdom and women like Frances could become a target. It is decided that she will be safer away from court, so she is sent home to the peace and quiet of Longford, her family’s manor house in Wiltshire.

It’s not long, however, before Frances is summoned back to court where her ambitious uncle, the Earl of Northampton, has secured her a position as maid to the king’s daughter, the young Princess Elizabeth. But court has become a very dangerous place and Frances almost immediately finds herself in conflict with the king’s Lord Privy Seal, Robert Cecil, who is hoping to please the king by hunting down a witch. It’s not just women healers who are under suspicion, though; James also sees Catholics as possible conspirators – and he is right, because a secret plot is taking shape that could bring his reign to an early end.

As I’ve said, the title of this book is slightly misleading. Frances’s knowledge of the properties of herbs and plants and the danger this puts her in with Cecil is certainly an important part of the story, but this is not really a book about witches and witchcraft. I would describe it more as a book about a young woman trying to make her way in a world full of treachery, lies and conspiracies. Most of the second half of the novel is devoted to one of these conspiracies – the Gunpowder Plot of 1605 – and Frances’s own involvement in it. This is what I will remember about this book rather than the witch-hunting aspect, which doesn’t really come to anything.

Although I enjoyed the book overall, the pacing seemed to be a problem for me. The story gets off to a slow start and I felt that I’d been reading for a long time with very little happening; somewhere around the middle of the book when the Gunpowder Plot begins to take shape, I started to find it much more compelling. There is also a romance for Frances with the lawyer Thomas Wintour and I thought this was handled well, especially as Frances – and the reader – begins to have doubts as to whether he can or cannot be trusted.

Frances Gorges was a real historical figure, but she and her family are not characters I have come across before in historical fiction. It seems that very little factual information is available about Frances – I could only find a few basic details online – although more is known about her parents, Thomas Gorges and Helena Snakenborg. The lack of information on Frances must have given Tracy Borman the freedom to use her imagination in building a story around her, without being too restricted by historical fact.

By the end of the novel, there is a lot going on in Frances’s life and I will be interested to see how her story continues in the next two books in the trilogy.

Thanks to Hodder & Stoughton for providing a copy of this book for review via NetGalley.

7 thoughts on “The King’s Witch by Tracy Borman”