At the beginning of Thomas Hardy’s The Mayor of Casterbridge, Michael Henchard sells his wife at an auction, an impulsive act which he later regrets and which haunts him for the rest of his life. This horribly cruel and barbaric custom really did take place in England between the 17th and 19th centuries. Rosalind Laker’s 1978 novel Warwyck’s Wife – the first in a trilogy – opens with a similar scene in which a farmer puts his unwanted wife Kate up for auction at a market in Brighton, parading her in front of the crowd with a halter round her neck like an animal.

Among the men who decide to bid for Kate are nineteen-year-old Harry Warwyck and his older brother Daniel. Harry has the best of motives – he has fallen in love at first sight and wants to prevent Kate from being bought by someone who will treat her badly – but Daniel has seen an opportunity to obtain the wife he needs in order to claim his inheritance, Warwyck Manor. To Harry’s disappointment, it is Daniel who is successful…but will he be happy with his new purchase? It’s not the most pleasant or uplifting start to a novel, but Rosalind Laker does a good job of conveying the shame and degradation Kate feels because of her husband’s actions combined with relief at being released from her unhappy marriage and given the chance to start a new life.

Warwyck’s Wife is described as a romance, but there’s certainly nothing very romantic, in my opinion, about the relationship between Daniel and Kate. Daniel makes it clear at the beginning that he wants Kate only because he believes she can be useful to him, and although his feelings for her do begin to change, he is too obsessed with another woman – Claudine Clayton – to appreciate what he has in Kate. Daniel is a thoroughly unlikeable character, actually: he uses and discards Kate as it suits him; he hides the truth from Claudine; and the way he behaves towards Harry is hardly very brotherly either. Not my idea of a romantic hero – not that every book really needs a hero, of course. Kate, on the other hand, is a lovely person, although her devotion to the undeserving Daniel really frustrated me and I couldn’t understand how she could possibly have preferred him to Harry!

Luckily, there is a lot more to this novel than the ‘romance’. Another major part of the plot involves Daniel’s career as a boxer and his ambition to become a champion prize-fighter. The novel is set in 1826, during the reign of George IV, and although I have no interest in boxing in its modern form, I did find it interesting to read about Daniel’s preparation for his fights (or ‘mills’ as they were called), the hours of practice he puts in with his trainer, Jem Pierce, and the spectacle of the mills themselves, which attracted large crowds and were sometimes held illegally, at risk of being stopped by the local magistrate. It seemed a much more violent and chaotic sport than its modern equivalent too, unsurprisingly with little regard for the health and safety of the participants.

There is also a storyline involving Daniel’s plans to develop the little coastal village of Easthampton into a seaside resort similar to Brighton. As you can imagine, this causes a lot of conflict as the scheme meets support from some of the villagers but fierce opposition from others as new workers are brought in to carry out the construction work while existing businesses find themselves under threat. This subplot gives the author a chance to highlight social injustices and the difference in attitude between Kate and Daniel, as Kate does everything she can to improve the working conditions of the builders, masons and labourers while Daniel cares only about money and productivity.

Warwyck’s Wife is not a perfect novel but I found more to like than to dislike and went straight on to read the sequel, Claudine’s Daughter. 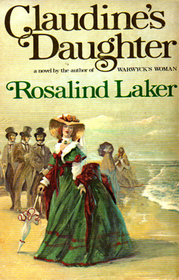 Claudine’s Daughter begins about twenty years after the previous book ends and introduces us to Lucy di Castelloni, Claudine Clayton’s daughter. Lucy has lived in Italy all her life and was married off at an early age to a much older man. Now, following her husband’s death, she has decided to come to England to see where her parents grew up and to find out whatever she can about her family and her origins. Arriving in the town of Easthampton, she quickly catches the eye of three very different men. The first is Richard Warwyck, Daniel’s son; the second is Timothy Attwood, who is distantly related to Lucy’s family; and the third is Josh Barton, who has ambitious plans that could affect the future of everyone in Easthampton.

Although this is very much the story of Lucy and the other ‘second generation’ characters, some of the characters from Warwyck’s Wife appear again too, including Daniel, Kate, and (very briefly) Harry. There’s also a new set of secondary characters: Emmie, the landlady of the house where Lucy takes lodgings; her daughter Meg; and Meg’s lover, a local fisherman. Lucy’s romantic entanglements form a large part of the novel but, like the first book, it is more than just a romance. It’s also a story about the uncovering of family secrets – and while the reader already knows what these secrets are (assuming we have read the first book in the trilogy), Lucy and most of the other characters do not. This means the plot is quite predictable, but the interest is in waiting to see how and when the truth will be revealed.

The most interesting aspect of the book, for me, was seeing how Easthampton, which was only a small village in Warwyck’s Wife, has grown into a thriving resort with piers, pavilions, hotels and theatres. A source of conflict throughout the novel is the question of whether or not the town should be connected to the railway network. Richard Warwyck is in favour as it will allow the area to develop further, but Daniel (whom I still found impossible to warm to) doesn’t like the idea of opening up access to the resort to large numbers of working class people and destroying the select atmosphere.

There is a third novel about the family – The Warwycks of Easthampton – but I don’t own a copy of that one yet and I think I’ve read enough about the Warwycks for now. Maybe I will read it at some point, but there are other books by Rosalind Laker that sound more appealing to me at the moment.