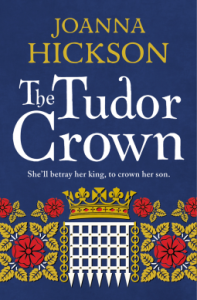 The Wars of the Roses – the 15th century series of conflicts between the House of York and the House of Lancaster – is one of my favourite periods of history to read about, partly because there are so many different ways in which the people and events of the time can be interpreted. Although I’ve read a few Wars of the Roses novels that take a more objective view of the period, authors – and readers – tend to be biased towards one side or the other. My personal preference is for York, but Joanna Hickson’s new novel The Tudor Crown is written from a decidedly Lancastrian perspective and shows both Henry Tudor and his mother, Margaret Beaufort, in a much more positive light than usual.

The Tudor Crown is a sequel to First of the Tudors and picks up where that book left off, but it does stand alone perfectly well so if you haven’t read the previous novel that shouldn’t be a problem. The story begins in 1471, just after the Lancastrians have been defeated at the Battle of Tewkesbury. With both Henry VI and his heir, the Prince of Wales, dead, and the Yorkist king, Edward IV, back on the throne of England, the Lancaster hopes seem to be in ruins. As one of the remaining Lancastrian claimants, young Henry Tudor’s life is now in danger and, accompanied by his Uncle Jasper, the Earl of Pembroke, he flees the country and takes refuge in Brittany. And here he must stay, for almost fourteen years, biding his time and trying to build up the support he will need to one day return to England and take the throne he believes is his.

Meanwhile, Margaret Beaufort, Henry’s mother, has been left widowed following the death of her husband at the recent Battle of Barnet and has married again, this time to Thomas Stanley. She returns to court where she serves the wives of first Edward IV, then Richard III, but she has still not given up hope of Henry becoming king and continues to work tirelessly on his behalf. If only she could persuade Thomas Stanley to help her…but Stanley has been walking a tightrope between York and Lancaster for years and won’t make a final decision until he is sure victory is within reach.

The Tudor Crown is written partly from Henry’s point of view and partly from Margaret’s, with the chapters alternating between the two. I found the Henry chapters the most interesting because I have never read about his time in exile in so much depth before. I was pleased to read in Joanna Hickson’s Author’s Note that most of the people Henry met during this time really existed. She does invent a romance for him with the fictional Catherine de Belleville, but I didn’t mind that as factual information on Henry’s exile is quite limited and if the author hadn’t used her imagination to fill in some of the gaps this wouldn’t have been much of a story. I loved the descriptions of the various places Henry visited and stayed at in Brittany, such as the Château de l’Hermine in Vannes (again a real place, but which sadly no longer exists in its original form). The Margaret chapters held less appeal for me simply because I am much more familiar with the events taking place in England during that period.

Both characters are portrayed with sympathy and understanding; in fact, I think Joanna Hickson might be the first author who has succeeded in actually making me like Henry (or Harri, as she refers to him, using a Welsh version of his name). He feels very human in this book and I almost found myself supporting him in his attempts to become king – although I still couldn’t bring myself to side with him against Richard at the Battle of Bosworth or to accept that Richard was responsible, beyond doubt, for the deaths of the Princes in the Tower. I think there is plenty of doubt, which is why it is still being discussed and debated more than five hundred years later.

This is Joanna Hickson’s third book about the Wars of the Roses, following Red Rose, White Rose and First of the Tudors (her other two novels, The Agincourt Bride and The Tudor Bride are set in the period just prior to this). She mentioned in her Author’s Note that she is planning to write about Margaret Beaufort again in her next novel, so I will look forward to that one.

18 thoughts on “The Tudor Crown by Joanna Hickson”