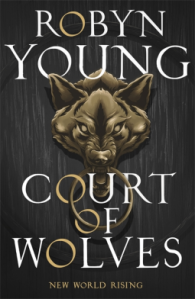 Robyn Young’s New World Rising series got off to a promising start in 2016 with Sons of the Blood and now it continues with the second novel, Court of Wolves. I would recommend beginning with the first book if you can as the story is very complex and I’m not sure how easy it would be to follow if you were to jump straight into this one. For the rest of this review, I will assume that you have either already read Sons of the Blood or don’t mind coming across one or two spoilers here.

Court of Wolves begins in 1486 with Jack Wynter arriving in Florence where he plans to seek an audience with Lorenzo de’ Medici. He has reason to believe that Lorenzo will be able to answer some of his questions regarding his father, Sir Thomas Vaughan, who was executed during the recent Wars of the Roses in England. He is also hoping for help in locating his old friend, the priest Amaury de la Croix, who has been taken captive and may be hidden somewhere in the city. As ruler of Florence, however, Lorenzo already has enough worries of his own with his power coming under threat from a secret society known as the Court of Wolves. If Jack can infiltrate the society and report back to Lorenzo, then maybe Lorenzo will help him.

Before he died, Sir Thomas Vaughan had entrusted Jack with a map hinting at undiscovered lands and new sea routes. This map has been stolen by Jack’s half-brother, Harry Vaughan, and is now in the possession of the newly crowned Henry VII. If these lands really exist, then Henry wants England to benefit from discovering them – but with the sailor Christopher Columbus seeking funding from Queen Isabella of Spain to finance his own voyage of exploration, Henry fears that the Spanish could get there first. He sends Harry Vaughan to Isabella’s court to find out what is happening and to ensure that Columbus never sets sail, but once there, Harry becomes drawn into Queen Isabella and King Ferdinand’s war in Granada.

Court of Wolves is set during a fascinating period in Europe’s history and the chapters alternate between Jack in Florence and Harry in Spain. There’s a sense that the world is changing and looking towards the future, with England, Spain, the Italian city states and others all searching for new opportunities to grow, expand and trade. Jack’s sections of the book were my favourites, partly because Jack is our hero while Harry is more of a villain, but also because I loved the descriptions of Florence and the Medici court – always a wonderful setting! I wasn’t very keen on the secret society storyline, but it was only one aspect of the novel and there were plenty of other things to enjoy.

The Harry chapters were interesting too, especially as I haven’t read about Isabella and Ferdinand’s Granada War in as much detail as this before. The war was a series of campaigns by the Spanish monarchs aimed at taking control of Granada, the last remaining Islamic stronghold in Spain, and Harry is at the heart of the action, present at the bombardment of Loja and the siege of Malaga. I can’t say that I liked Harry any more than I did in the first book, but I did care about what happened to him; even in another country, hundreds of miles from England, he seems to be very much under the control of Henry VII and is starting to face the consequences of his earlier actions during the reign of Richard III as well.

Although Jack and Harry are having separate adventures in this novel, there are still some links between them and no doubt their paths will cross again in the future. I haven’t seen any news on a third book yet, but I’m sure there will be one as the final chapter sets everything up perfectly for a continuation of the story.

Thanks to Hodder & Stoughton for providing a copy of this book for review via NetGalley.

9 thoughts on “Court of Wolves by Robyn Young”