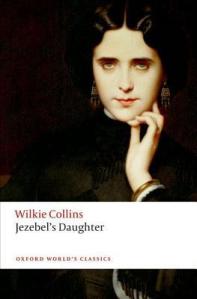 I love Wilkie Collins but it’s been a while since I last read one of his books, so when the Classics Club recently challenged us to read a classic Gothic novel, thriller or mystery during the month of October, I thought Jezebel’s Daughter would be a good one to choose. Published in 1880, this was one of Collins’ later books, although it was based on a much earlier – and apparently unsuccessful – play of his, The Red Vial. I wasn’t really expecting it to be as good as his more famous novels such as The Woman in White, The Moonstone, No Name or my personal favourite, Armadale, all of which I read and loved in the years before I started blogging, but now that I’ve read Jezebel’s Daughter, I can say that while it’s not quite in the same class as those other books, it’s still very entertaining and enjoyable.

At the heart of the novel are two very different women who seem to have little in common other than the fact that they are both widows. First, in England, we meet Mrs Wagner, who has inherited her husband’s share of the business in which he had been a partner. Mrs Wagner is looking forward to becoming more involved in running the business and making some changes of her own – including employing more women. As a philanthropist, she also wants to use her money and position to help those less fortunate, such as Jack Straw, an inmate in the Bedlam lunatic asylum. Believing that Jack would benefit from some kindness and affection, she takes him into her own home, determined to prove that her theory is correct.

The action then switches to Germany, where we are introduced to Madame Fontaine, the widow of a French scientist who had devoted his life to the study of poisons. Since her husband’s death, she has found herself struggling financially, so when her daughter Minna falls in love with Fritz Keller, the son of Mrs Wagner’s wealthy business partner, she sees a possible solution to their money problems. Unfortunately, Madame Fontaine has a terrible reputation – she is the ‘Jezebel’ of the title – and Fritz’s father is strongly opposed to the idea of a marriage between his son and Minna. Can Madame Fontaine find a way to ensure that the marriage takes place before her debts are due to be paid?

Jezebel’s Daughter is a great read – it’s suspenseful and exciting and, because it’s a relatively short novel, it’s faster paced than some of his others as well. With a story involving poisonings, stolen jewels, unexplained illnesses, mysterious scientific experiments, morgues, asylums and plenty of plotting and scheming, there’s always something happening and for a long time I couldn’t imagine how it was all going to be resolved! As well as being fun to read, the book also touches on some important social issues, such as job opportunities for women (Mrs Wagner, like her late husband, believes that women should be employed in the office in positions that would normally be filled exclusively by men) and the humane treatment of people with mental illnesses.

The two central characters are wonderful – not the two young lovers, as you might expect, but the two middle-aged widows. They complement each other beautifully, one representing all that is good and the other all that is bad. But although Madame Fontaine can be seen as the villain of the story, Collins portrays her in a way that allows us to have some sympathy; she is an intelligent, ambitious woman for whom nothing has ever gone smoothly and most of the wicked acts she commits are done out of desperation or love for her daughter.

If anyone has read Collins’ better known works and is wondering what to read next, I would definitely recommend this one – or The Law and the Lady, Man and Wife or Poor Miss Finch, all of which I enjoyed too. I’m glad I decided to read this book for the Classics Club Gothic event – it was the perfect choice!

This is book 9/50 read from my second Classics Club list.

I am also counting this book towards the R.I.P. XIII Challenge (categories: suspense, Gothic).