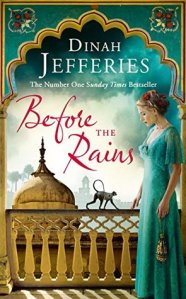 Whenever I want a book to transport me to another country and another time, I need look no further than Dinah Jefferies. So far her novels have taken me to Ceylon, Malaya and French Indochina; this one, Before the Rains, is set in Rajputana, India, in the 1930s.

Our heroine, Eliza Fraser, has a passion for photography and hopes to build a career for herself as a photojournalist. When an old family friend and British politician, Clifford Salter, arranges for her to spend a year photographing the royal family of one of India’s princely states, she is both delighted and nervous. India is where she grew up and she still feels a connection to the land and the people, but it is also where, at the age of ten, she witnessed the death of her father in Delhi.

Arriving at the palace where she will live for the next twelve months, Eliza finds that not everyone is happy to have an outsider interfering in their affairs, especially when they discover that she is a widow. Other people, though, are much more welcoming – including Jayant Singh, the younger brother of Prince Anish. When Jay offers to escort Eliza around the countryside in search of subjects for her photographs, she is distressed by the poverty she sees and urges Jay to do something to help his people. In return, Jay helps her to understand the effect British rule has had on India. As they discuss these and other issues and get to know each other better, a friendship forms between them which quickly becomes something more…but Eliza knows that there can only be any future for them if Jay is prepared to defy both his family and the expectations of society.

Like all of Dinah Jefferies’ novels, this one features some lovely descriptive writing, bringing to life the sounds, colours, tastes and smells of India. But along with the beautiful descriptions, there are some brutal, horrifying ones, such as an account of a widow throwing herself onto her husband’s funeral pyre, followed by a discussion of the custom of sati, as well as the fates of unwanted baby girls and of women suspected of witchcraft. For all Eliza had spent her childhood in India, she had been insulated within the British community and it’s only now that she is going out on her excursions with Jay that she feels she is truly starting to understand the country, its history and its people.

Although I loved the setting, I didn’t enjoy this book as much as I enjoyed some of Jefferies’ others, which is mainly due to the fact that I found it predictable and too reliant on coincidences – there were at least two plot twists towards the end that I found completely unconvincing. I also struggled to believe in Eliza’s romance with Jay; I liked both characters, but I thought it seemed too convenient that on arriving at the palace Eliza would immediately catch the eye of a prince. Maybe I should have just been less cynical and more prepared to suspend disbelief.

This is probably my least favourite of Dinah Jefferies’ novels, but I’m still looking forward to reading her new one, The Missing Sister, which will be set in 1930s Burma.

10 thoughts on “Before the Rains by Dinah Jefferies”