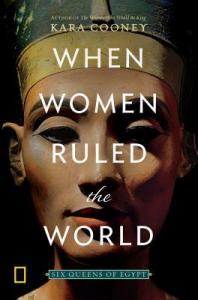 Despite my love of history I know very little about Ancient Egypt, so when I was given the opportunity via National Geographic and TLC Book Tours to read When Women Ruled the World, I was immediately interested. Written by Kara Cooney, professor of Egyptology at UCLA, the book explores the lives of six female rulers – Merneith, Neferusobek, Hatshepsut, Nefertiti, Tawosret and Cleopatra – asking how each was able to come to power, what challenges they faced during their reign and what the modern world can learn from studying them.

Apart from Cleopatra, I had never read about any of the other five rulers before, so I was looking forward to adding to my knowledge, but I don’t feel that I’ve learned as much about these six women as I would have expected to from this book. I can appreciate that the author was doing her best to work with the limited amount of factual information we have available to us, but there’s still a lot of speculation, interpretation and uncertainty. The book has clearly been thoroughly researched and there are detailed notes at the back, as well as an impressive list of resources and further reading; I just don’t feel that I’ve come away from the book with any real idea of what these female pharaohs may have been like as people, what their style of ruling was like or what their main accomplishments were.

To be fair, the author does point out that one of the reasons why we know so little about these women’s achievements is because the male pharaohs who followed tried to remove all traces of their predecessor from the historical records. Thutmose III, who ruled after his aunt Hatshepsut, “smashed her statues to bits, chiseled away the reliefs of the Punt expedition, and reassigned kingly images to her husband or father.”

This is a book with a very strong feminist message, which is fascinating when related directly to the Egyptians, for example when Cooney discusses how Nefertiti may have had to assume a male name and identity in order to rule, or how Hatshepsut had herself depicted wearing masculine clothes and with the appearance of a man. However, the author spends too much time drawing parallels with modern politics, discussing the stereotypes directed at female leaders and the language used to describe women like Hillary Clinton, Margaret Thatcher or Angela Merkel. It seems that the purpose of the book is to show that women have qualities which make them better equipped to rule the world than men and that the stories of the six female pharaohs of Egypt are being used to illustrate that point, rather than because they are interesting historical figures in their own right whose stories deserve to be remembered.

On a more positive note, I thought this book was written at the right level to make it accessible to the general reader. It wasn’t necessary to have any prior knowledge of Ancient Egypt and I found it easy enough to follow and to understand. There’s a map at the beginning and a useful chronology showing each ruler’s place in history, as well as an interesting selection of photographs and illustrations. Although this book wasn’t quite what I’d expected, I’m pleased to have at least been made aware of women like Merneith, Neferusobek and Tawosret, whose names weren’t even familiar to me before. I would like to read more about them one day.

21 thoughts on “When Women Ruled the World by Kara Cooney”