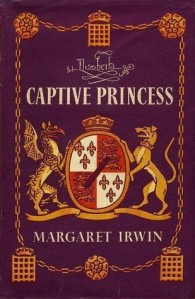 I loved Young Bess, the first book in Margaret Irwin’s Elizabeth I trilogy, so I didn’t want to wait too long before picking up the second. I was hoping for another great read but, although there was still a lot to like about this book, I didn’t think it was as good as the first one.

Published in 1948, Elizabeth, Captive Princess, continues the story of the young Elizabeth. The novel begins with the death of Elizabeth’s half-brother, Edward VI, leaving the succession to the throne of England in doubt. We then follow the tragic story of Lady Jane Grey, queen for nine days before eventually being beheaded after Elizabeth’s half-sister Mary comes to the throne. This is a fate that Elizabeth could face herself as she also becomes linked with plots and conspiracies during Mary’s reign, leading to her imprisonment in the Tower of London.

Before the novel ends, two very different men have entered Elizabeth’s life: one is Robert Dudley, son of the Duke of Northumberland and another prisoner in the Tower; the other is Philip of Spain, who has come to England at last to marry Queen Mary. I would expect Elizabeth’s relationships with these two men to form the basis of the final book in the trilogy, Elizabeth and the Prince of Spain, but this particular book concentrates on the stories of Lady Jane Grey and Queen Mary. We actually see very little of Elizabeth herself in this book, which I thought was strange as she is the title character, although I suppose it’s not too surprising as a lot of the drama during this specific period was taking place elsewhere.

The lack of focus on Elizabeth wasn’t really a problem for me in itself; after all, in Young Bess it had been the secondary characters that I found most interesting anyway, particularly Thomas Seymour and his brothers Edward and Henry. But the characters in this book just don’t come to life in the way that the Seymours did and I struggled to connect with any of them on an emotional level. This made the novel feel a bit slow and flat, which was disappointing for me after enjoying the first one so much.

I don’t want to sound too negative, though, because I did like this book and the quality of Margaret Irwin’s writing still makes it a worthwhile read. I love her descriptive writing and the way she recreates Tudor London:

It was seven o’clock as they entered the city of London. The sun was setting in a fury of flame and storm-clouds. All the dark rickety wooden houses leaning top-heavily across the streets as though they were nodding to each other, all but rubbing each other’s foreheads, all seemed to have put on scarves and petticoats, so many bright cloths fluttered from the windows, while the gaily painted shop signs flaunted and creaked and clattered in the breeze.

Away from the main storylines, I enjoyed all the other little details of 16th century life and 16th century history. For example, I was interested in the account of the Edward Bonaventure’s voyages to the White Sea and the ‘strange land of endless snow’ which I first read about in The Ringed Castle by Dorothy Dunnett.

Having come this far, I will be finishing the trilogy with Elizabeth and the Prince of Spain, but will then look forward to reading some of Margaret Irwin’s other books. I have The Galliard, her novel about Mary, Queen of Scots and the Earl of Bothwell on my TBR and would also like to read The Stranger Prince, about Prince Rupert of the Rhine.