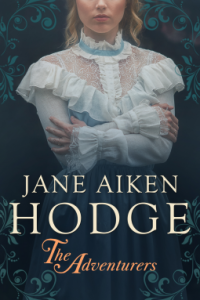 I’m enjoying working my way through Jane Aiken Hodge’s novels but, as I suppose is the case with many authors’ work, I’m finding that the quality varies a lot. The Adventurers (first published in 1965) is certainly much better than the last one I read, First Night, but not as enjoyable as Marry in Haste, Watch the Wall, My Darling or Strangers in Company.

The novel is set towards the end of the Napoleonic Wars when, following the Battle of Leipzig in 1813, the defeated French army begin their retreat through Germany. The von Hugel castle lies in their path and seventeen-year-old Sonia von Hugel hides in the hayloft as her family and servants are massacred around her. When the violence is over, Sonia escapes from the castle disguised as a boy, intending to make her way to her aunt’s home across the mountains. Stopping at an inn along the way, she has an encounter with the mysterious Charles Vincent, who makes her an offer which causes her to change her plans and agree to accompany him to France instead.

In England, meanwhile, we meet Lord Denbigh and his nephew Philip Haverton, who are preparing to travel to France on diplomatic business. What will happen when their paths cross with Charles and Sonia’s? What is their connection with Sonia’s friend, Elizabeth Barrymore? And, most importantly, where does Charles keep disappearing to without explanation?

As this novel, like many of Aiken Hodge’s, is set in the Regency period, it’s difficult not to make comparisons with Georgette Heyer. The opening sequence, with the heroine dressing as a boy and meeting the hero at an inn – and the misunderstandings that follow – is exactly the sort of storyline that will be familiar to Heyer readers. After this promising beginning, though, the story becomes much less Heyer-like, with very little humour and lightness and a more serious, sombre feel. The politics of the period also form quite an important part of the novel, with Napoleon facing defeat and a plot to restore the Bourbon monarchy gathering pace.

I have described Charles and Sonia as the hero and heroine – and it did seem that way at first – but I quickly began to lose interest in them, especially as Charles was absent for such long sections of the novel (for reasons I found too easy to predict). It was disappointing that their plan to travel across Europe as ‘adventurers’, making their living from winning money at cards, didn’t really come to much and there was far less adventure in the book than I had hoped for. One character who did interest me was Elizabeth Barrymore; I felt that it was her story rather than Sonia’s that the author really wanted to tell. She is given a romantic interest of her own and although I found the way it develops predictable as well, I thought it was more engaging and more moving than Sonia’s – a story of mistakes, regrets and second chances, a bit like Anne Elliot’s in Jane Austen’s Persuasion. Aiken Hodge wrote biographies of both Austen and Heyer, so it’s not surprising that their influence can be seen in her work.

The Adventurers is not a favourite by this author, then, but I did enjoy getting to know Elizabeth and learning a little bit about the political situation in Europe in the aftermath of the Battle of Liepzig.

14 thoughts on “The Adventurers by Jane Aiken Hodge”