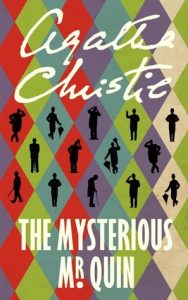 Have you met Mr Satterthwaite and his mysterious friend, Mr Harley Quin? I hadn’t, until I saw that the book selected for Read Christie 2019 this month was The Mysterious Mr Quin, a collection of short stories published in 1930 and featuring a very unusual sort of detective. In fact, he is not really a detective at all, but more of a catalyst who “has a power – an almost uncanny power – of showing you what you have seen with your own eyes, of making clear to you what you have heard with your own ears…”

There are twelve stories in the collection, all of which originally appeared separately in various magazines throughout the 1920s. They all stand alone as individual mysteries but reading them in the order they appear in the book is very effective as each one seems to build on the one before – and the twelfth story, Harlequin’s Lane, should definitely be read last.

The first story, The Coming of Mr Quin, sets the tone for the rest of the book. It begins with Mr Satterthwaite, an elderly English gentleman, attending a New Year’s Eve party at a country house when conversation turns to the suicide of Derek Capel, the former owner of the house. The suicide took place several years earlier, but is still unexplained. In the middle of this discussion, there is a knock at the door and Mr Satterthwaite’s friend Harley Quin appears, asking for shelter while his broken-down car is repaired. Mr Quin joins in the conversation and, by prompting Satterthwaite to ask relevant questions and to think carefully about the sequence of events, the truth behind Mr Capel’s death suddenly becomes obvious – and has important implications for some of the guests at the party that night.

Most of the other stories, with one or two exceptions, follow a similar format: Mr Satterthwaite is at a house party, an opera, on holiday, or attending some other sort of social gathering with his upper-class friends, when he becomes aware that one or more of his companions is hiding a secret – a criminal past, a thwarted love affair or an involvement in a murder. Mr Quin then makes a sudden appearance (sometimes in person and sometimes by leaving a message or cryptic clue) and steers Mr Satterthwaite in the right direction, enabling him to solve the mystery. Some of these mysteries have been unsolved for many years and Mr Quin claims that he is acting as an ‘advocate for the dead’, getting justice for long-ago victims of crimes, while also helping Mr Satterthwaite to influence people’s lives in the present.

Although Mr Satterthwaite is a rich man, with a comfortable, privileged lifestyle, I found him quite a sad and lonely character. He has never married and despite his busy social life his friendships seem to be mainly on a superficial level. He describes himself as a ‘looker-on at life’, someone who observes other people’s dramas without being involved in any himself. If it wasn’t for the fact that other characters in the book see and interact with Mr Quin, I could have believed that Mr Satterthwaite had invented him as an imaginary friend. There is certainly something surreal and otherworldly about Mr Quin, with his unexpected arrivals and departures, and the way his appearances are usually accompanied by a strange trick of the light – he is seen silhouetted against the setting sun, standing in front of a stained glass window, or illuminated by the sun shining through the trees.

This is the only collection of Mr Quin stories, although I think he and Mr Satterthwaite do make one or two appearances in other books or stories. I found this book quite different from anything else I’ve read by Christie and I’m loving the way taking part in this challenge is encouraging me to pick up titles I might otherwise have ignored in favour of the more popular Poirots and Marples.

32 thoughts on “The Mysterious Mr Quin by Agatha Christie”