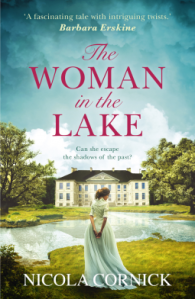 One day in 2004, thirteen-year-old Fenella Brightwell is on a school trip to Lydiard House in Swindon when she becomes separated from the rest of the class. Following a disturbing encounter with a drunken old man who appears to be dressed in period costume, Fen manages to find her way out of the stately home to rejoin her friends – but not before picking up a beautiful golden dress left carelessly on a chair and pushing it into her bag. Fen doesn’t know why she keeps feeling such a compulsion to take things that aren’t hers, but perhaps it is a way of coping with her difficult home life. She hasn’t seen her father for years, and with her mother away on a series of archaeological digs, Fen has been left to care not only for herself but for her alcoholic grandmother, Sarah, as well.

In the present day, Fen is now a woman of twenty-seven trying to build a new life for herself as an antique dealer after leaving her abusive husband. Sarah has recently died and has left Fen a package containing the gold dress, which Fen has never even thought about for years, along with a cryptic message warning her to be careful. Fen has no idea what her grandmother means – how can a dress be dangerous? – but now that she has it in her possession she becomes aware of the strange, almost supernatural powers it wields.

To understand the history of the dress and the secrets it holds in its fabric, we need to follow another storyline, this one set in the eighteenth century. In 1765, Lady Isabella Gerard is surprised when she receives a lovely golden gown as a gift from her husband. Eustace, Lord Gerard, is a cruel and manipulative man and doesn’t usually show her any generosity. She doesn’t really want to accept his gifts, but tells her maid, Constance, to take the dress away and keep it until the day comes when she feels like wearing it. Constance, however, is later approached by Lord Gerard, who seems to have changed his mind about the dress and tells her to destroy it. Who should she obey? What is so important about the golden gown? And what effects might it have on Constance herself?

This is the third Nicola Cornick novel I’ve read (The Phantom Tree and House of Shadows are the previous two) and it has many of the things I’ve come to expect from her books: multiple narratives set in different time periods, a big country house, objects from the past finding their way into the present, and a touch of the supernatural. The house in this book is based on a real place, Lydiard House, set in beautiful parkland in Swindon, Wiltshire, and can still be visited today. In reality, it was home to the St John family, rather than the Gerards in the novel, although one of its residents – Lady Diana – was apparently the inspiration for Isabella Gerard. A mixture of fact and fiction, then, but with the emphasis more towards the fiction.

I preferred the historical storyline to the modern day one, although I can’t say that I liked either of our historical narrators, Isabella and Constance. They had both been treated badly in various ways, so I felt that I should have had more sympathy for them, but I just didn’t – I found Isabella self-absorbed and Constance bitter and spiteful. Having said that, the story probably wouldn’t have worked if they had been different sorts of people. I did appreciate the fact that neither of them revealed everything about themselves too early in the book, which meant that there were secrets to be discovered later on.

As for Fen, I never quite warmed to her either, but I did enjoy seeing her storyline tie together with Isabella’s and Constance’s as the book headed towards its conclusion. There are lots of little snippets of information on Swindon’s history which helps to form links between the two periods and I particularly loved a subplot involving a gang of ‘Moonrakers’ (smugglers). I couldn’t help feeling that there were too many things left unexplained, though. The time travel that seemed to occur in Lydiard House at the beginning of the book never happened again, which was disappointing, and I didn’t fully understand why the dress exerted so much power over the present day characters either – except to add a spooky, Gothic element to the story.

I found more to like than to dislike about The Woman in the Lake, but if you’re new to Nicola Cornick I would recommend starting with The Phantom Tree.

Thanks to HQ for providing a copy of this book for review via NetGalley.

15 thoughts on “The Woman in the Lake by Nicola Cornick”