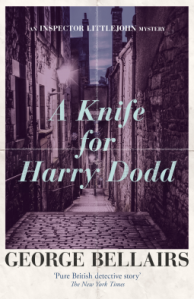 George Bellairs was a very prolific crime author, with over fifty books published between 1941 and 1980. This is the first one I’ve read and I enjoyed it, which means I have a lot to look forward to! Although Bellairs (a pseudonym of Harold Blundell) did write some standalone novels, most of his books were part of his Inspector Littlejohn series of which A Knife for Harry Dodd is the nineteenth. Fortunately, this is not a series which needs to be read in order!

As the title suggests, the novel begins with Harry Dodd being stabbed in the back as he begins to walk home from his local pub one night. Instead of calling the police or an ambulance, Harry summons his girlfriend Dorothy Nicholls and her mother, who immediately set off in the car – with great difficulty, as neither of them can actually drive. Eventually they manage to find Harry and help him into the car, but they are unaware of how badly wounded he is and by the time they get him home he is dead.

Inspector Littlejohn of Scotland Yard is called in to investigate the crime and, with the help of his assistant Sergeant Cromwell and the local police, he begins to unravel the secrets of Harry Dodd’s personal life in an effort to identify the murderer. At first, Dorothy and her mother are under suspicion, but the range of suspects soon widens to include another of Harry’s mistresses, his estranged wife and their sons and daughters, and his brother, an influential politician. As the story unfolds, we begin to understand what sort of man Harry Dodd was and the nature of his relationships with the various people in his life. It’s not an easy mystery for the reader to solve, as some of the information we need isn’t provided until later in the book, but I enjoyed following Littlejohn’s investigations and trying to guess who the culprit could be.

Although it’s disappointing that most of the women in the book are portrayed as either silly and helpless or loud and domineering, there’s some great characterisation too. I particularly liked Ishmael Lott, a timid little man who sells parrot seed and dreams of making his fortune on the stock market, and Mr Glass, a patient in an asylum that Littlejohn visits in his search for one of the suspects. In fact, Littlejohn himself is probably the least memorable of all the characters in the book! In a way, I liked the fact that he just gets on with solving the mystery unobtrusively, but it would still have been nice to have known a little bit more about him. Maybe his background is given in the earlier novels and Bellairs assumed he didn’t need to tell us again.

The next Inspector Littlejohn mystery I read will probably be Corpses in Enderby, which I received as a free ebook when signing up for updates from the George Bellairs website. I’m not sure if and when this offer will end, so hurry if you want a free George Bellairs book too!

10 thoughts on “A Knife for Harry Dodd by George Bellairs”